Capsule Summary: Charles records a message to his parents telling them of the horrors of the 4077th; meanwhile, Hawkeye tries to get to Tokyo to meet a gorgeous nurse.

The only thing keeping this from being a superb episode, in my opinion, was the need to include every character. I’ve said it time and time again (and I’m sure I’ll keep on saying it) but finding a way to shoehorn every character into episodes rarely worked. This is one of those cases. It’s a Charles episode, of course, but also heavily features Hawkeye, B.J., and Colonel Potter. Klinger also has a decent role.

The plot points spotlighting Radar, Father Mulcahy, and Margaret are not as strong. The scene between Father Mulcahy and Charles in the shower is basically pointless; Mulcahy’s other brief scenes seem more organic. I do like how Radar explains his ESP ability to Charles. The less said about Margaret flirting with Charles the better.

Those minor quibbles aside, I love the vast majority of the episode. Colonel Potter painting Charles is hilarious, particularly the classic “Don’t change the color of your face! I’m out of umber!” B.J.’s practical joke is brilliant but the best part is the simple fact that it was B.J.’s practical joke, not Hawkeye’s.

M*A*S*H rarely maintained any sort of continuity so it is always nice to watch an episode like this that continues a running storyline (Charles wanting to escape the 4077th) and past events (the mention of Colonel Baldwin). The producers and writers could have simply plopped Charles into the 4077th and ignored his being new. Instead, he was allowed to slowly acclimate: to the weather, to the Swamp, to the food, and to meatball surgery. 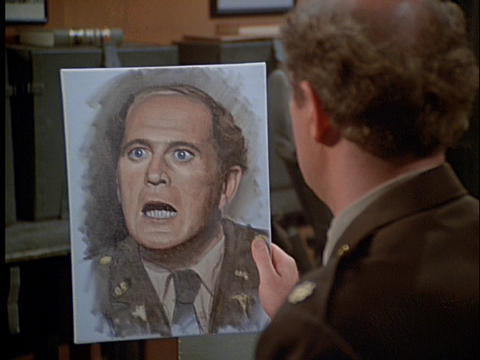 Charles without any umber

I wonder how viewers are supposed to feel about Hawkeye’s failed attempts to get to Seoul to spend the weekend with Nurse Gilmore. On the one hand, for once he’s being pursued rather than pursuing, so there’s some novelty involved. On the other hand, his constant whining gets old fast.

Is it just me or does Charles sound a little different in this episode? I’d have to go back and check other early Season 6 episodes to be sure but perhaps David Ogden Stiers had yet to settle on the accent he’d use for Charles.

I’m of the opinion that Charles made up the story about his nephew Felix being discharged for fainting spells just to see if Klinger would fall for it.

B.J. refers to the aftershave he gives Hawkeye as “Babalu Number Five.” That’s a clear reference to Chanel Number Five but what does Babalu refer to? The famous Desi Arnaz song?