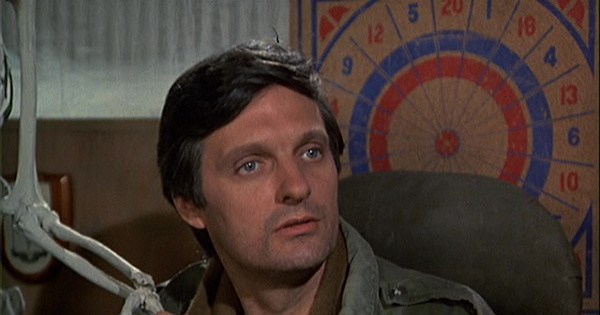 Capsule Summary: General Clayton sends a psychiatrist to the 4077th to determine if the unit should be broken up.

This episode served as a “re-pilot” to M*A*S*H, which started its second season in a time slot following All in the Family on Saturdays. That meant millions of viewers would be seeing it for the first time. Larry Gelbart explained in an August 1998 post to the alt.tv.mash newsgroup how the episode was aimed at first time viewers:

The episode was the first show of the 2nd season. The idea was to make the script a 2nd pilot, i.e., introduce the characters and the background understandable for viewers who might be seeing the show for the first time. The 1st season we had very low ratings and so was an opportunity – and a necessity – in educating 1st time viewers as to what we were all about.

That explains why the first few minutes, which see General Clayton giving Captain Hildebrande an overview of the 4077th and some of its personnel, seem somewhat excessive to longtime fans.

I don’t really have much to see about the episode itself. It’s fantastic. I do wonder exactly what Frank was doing sneaking out of the ladies showers with an armful of clothes. Was he stealing clothes from nurses? Or were Hawkeye and Trapper in the showers and the sign was left up accidentally?

I love Captain Hildebrande’s analysis of the 4077th:

In my short stay here, I have seen textbook examples of neuroses, psychoses, I have seen voyeurism, fetishism, and a few ‘isms’ I’ve never even heard of. And let me tell you this, General: These impossible people are in an impossible place doing totally impossible work. They’re mad, quite mad, all of them. And the only act I can think of that would be madder still would be breaking them up.

But why were Hawkeye and Trapper so despondent after Hildebrande declared the 4077th should stay together? Hawkeye laments the fact that they “screwed up in reverse. We’ll never get out of here.” What were they hoping would happen? That Hildebrande would consider them insane and have them shipped back to the States?

Finally, fear that the 4077th is going to be split up was later revisited in Season 10’s “Rumor at the Top.”

The voiceover narration during the “roll call” scene after the tag features dialogue lifted almost word-for-word from the very end of the movie MASH.

The shot of the 4077th from the air seen at the end of the “roll call” is from “M*A*S*H–The Pilot.” If you look closely you can see Hawkeye and Trapper handcuffed together.

There’s a very obvious and jarring edit at the end of the episode. General Clayton asks Margaret if she’s still in the same tent. Henry says “No, they moved me out just after the first of the y-” and suddenly there is an abrupt cut to Hawkeye handing Clayton a martini.

While handing Clayton the martini, Hawkeye says “finest kind,” which was a catch phrase he used more in the novel and movie.

Henry calls Hawkeye “PierceIntyre” while handing him the butter.

Linda Meiklejohn makes her eighth and final guest appearance as Leslie Scorch in this episode.

This is reportedly the first episode in which Kellye Nakahara appears. She’s uncredited here. I think you can see her in the background in the O.R. at around the 5:31 mark and she can also be seen in line in the Mess Tent when Henry is introducing Captain Hildebrand to Hawkeye and Trapper.