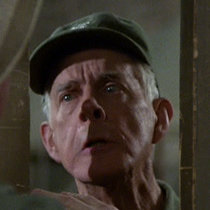 Capsule Summary: Colonel Potter tries to keep his blood pressure down while Klinger deals with a mountain of paperwork.

I spent way too much time after rewatching this episode trying to figure out exactly what the title means. I focused mostly on the “Red/White” portion, ignoring the obvious reference to the three colors of the flag of the United States of America. At first I thought perhaps it had something to do with blood pressure measurement (cuffs or gauges, perhaps). Then I wondered if it maybe it was tied to red and white blood cells. That’s the best explanation I can think of, unless I’m missing something.

Poor, poor Klinger. He’s the Rodney Dangerfield of M*A*S*H. No respect at all. Although his statement to Margaret (“I never pulled anything on the job and I never would ever pull anything on the Colonel.”) seems like something of a stretch, Klinger wasn’t petty and it paints everyone else in a poor light that they assumed he was slacking off to get back at Colonel Potter for nixing his pass to Tokyo. Hawkeye in particular appears foolish and incompetent by not noticing that Klinger is ill and then actually ordering him, not to mention trying to put him on report.

Klinger’s angry reaction to the nixing (“I have yet begun to grump!”) was somewhat out of character as well.

As for Colonel Potter, I too would be upset if everyone was mollycoddling me. He’s a big boy and a doctor. He can take care of lowering his own blood pressure. It’s embarrassing to watch Hawkeye and Margaret and the whole gang treating Potter like he’s a little kid. Hiding salt? Bringing him breakfast, lunch, and dinner in bed? Offering him a glass of warm milk? Insisting on drinking lemonade? Ugh. I really wish Charles had stood his ground and ordered his cognac.

Jo Ann Thompson is credited as Nurse in the closing credits but I don’t see her in the episode.

I’d love to know how long it took the prop department to dress the company clerk set with all those papers–and how much work it was to clean up.

This was one of only a handful of episodes of M*A*S*H to be directed by a woman. Gabrielle Beaumont later also directed an episode of AfterMASH.

The on-screen text at the end of the episode explaining developments in the understanding of primaquine is unique in the history of the series. “As Time Goes By” also featured on-screen text but it was a dedication, not an explanation.