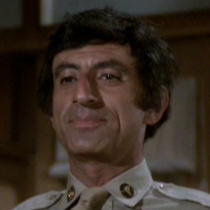 Capsule Summary: A change in military scrip leads Charles to implement a get-rich-quick scheme that backfires. Meanwhile, Klinger’s attempt to get into West Point also backfires.

I much prefer the B story in this episode, involving Klinger’s latest Section 8 stunt, to the A story in which Charles goes to great lengths to rip of South Korean civilians and, not surprisingly, gets his comeuppance. I love how gleeful Colonel Potter is when Klinger walks in wearing his uniform. After so many similar and obviously fake stunts, I suppose Potter can be forgiven for being intrigued by something new.

I’m conflicted about the ending to Klinger’s B story, however. I wonder if it would have been better had he actually done okay on the West Point exam but still failed. That would have given Potter and B.J. a bit of a shock, not to mention Margaret and Charles. Klinger could take some comfort in the fact that he didn’t blow the test and the status quo still could have been maintained.

The way it actually played out leaves Klinger distraught and feeling pretty stupid. He couldn’t even spell his own name right, let alone a single question on the test. I wonder how well Margaret would have done. If she had decided to take the test alongside Klinger to prove that she deserves to be in West Point and also failed, that could have led to some amusement.

As for the A story, Charles obviously is not painted in a very kind light. His treatment of the South Koreans is unfortunate at best, downright cruel and a little racist at worst (particularly his comments about bowing).

This was the 13th episode produced for Season 6 so the writers either thought they had a handle on how they wanted Charles to act or they weren’t so sure and basically made him a Frank stand-in. In future episodes, Charles is shown to be somewhat money-hungry. Still, the fact that Hawkeye and B.J. refer to him as a fink suggests there was more than a little Frank in this episode.

Father Mulcahy’s emotional appeal to the camp to return the stolen $400 is just a little over-the-top. Just a little. But it worked and gave him something to do. Margaret had almost no involvement in the episode other than her display of shock 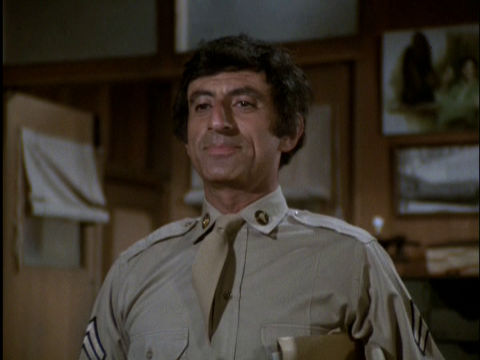 Klinger is out of uniform.

We never learn if Mr. Kim got his payment for the suit he made for Charles. Nor do we find out of he gave Hawkeye and B.J. the free dress shirts he promised them if they dealt with Charles.

Watch closely when the PA announcement is made that the scrip change is starting. There’s a stampede and at least one person falls down. I doubt that was scripted.

This was the second of two episodes in which Peter Riegert is credited as playing Igor rather than Jeff Maxwell. The first was “War of Nerves” earlier in Season 6. Here he gets into a fight with Zale over money.

Richard Lee-Sung makes an uncredited appearance in this episode. He’s in the crowd of South Koreans dealing with Charles.

I wonder how much money Charles lost. Hawkeye took $400 in soon-to-be-worthless blue scrip but the bag was still relatively full of $100 bundles. Charles only paid 10 cents on the dollar so he probably didn’t lose more than $50-60. Still a lot of money in the 1950s.