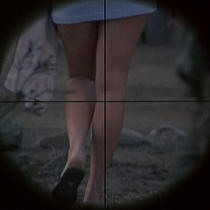 Capsule Summary: Hawkeye and Trapper are shocked and disgusted to learn that a soldier has purchased a South Korean woman as his personal servant.

I think this was one of the first episodes of M*A*S*H I ever saw when I started watching the series on FX back in the late 1990s. It’s not that I have a particularly vivid memory of watching it. The term “moose” stuck with me. That’s what I remember.

Although they are without a doubt the good guys here, Hawkeye and Trapper are nevertheless pretty patronizing when they talk about Young Hi not understanding what they’re saying while she’s standing between them. And what should we make of the fact that Hawkeye enjoyed some of benefits of having Young Hi around? He may not have been a fan of her cleaning but he allowed her to shave him and the tag suggests she also shined his boots.

Radar mentions that the Army will deal with soldiers that have a moose if they find out about it. But Colonel Blake makes it pretty clear that there’s nothing he or anyone can do because Sergeant Baker’s commanding officer also has a moose. Why couldn’t Hawkeye complain to someone outside Baker’s chain of command, someone in the JAG corps, for example? Or ask Radar to make some inquiries.

The poker game was a good solution, I suppose. I’m not sure why Baker agreed to participate considering he didn’t really like Hawkeye. More importantly, how could Baker not realize that Hawkeye had an earpiece? It’s a good thing Baker always held his cards in such away that Radar, using a telescope never seen again, could see them.

“The Moose” is notable for having very few regular cast members. Hawkeye, Trapper, and Radar are in it. Colonel Blake is in it as well but has just a few lines. Frank and Margaret are not in it. Neither are Father Mulcahy or Klinger, for that matter, although at this early point in the series that wasn’t unusual. And yet, despite involving only a handful of regular cast members, because Season 1 featured so many recurring characters, you don’t miss the characters that aren’t in it.

That’s something I’ve always liked about very early episodes. Spearchucker and Ho-Jon, limited as their roles are, help flesh out this episode and make the 4077th feel like a pretty big place. Seeing Ugly John and Leslie Scorch, who are little more than extras here, only adds to the impression that there are countless stories to be told at the 4077th and not all of them have to involve every character. Sadly, by the last few seasons, the pendulum had swung too far in the other direction and every episode had to involve every main character no matter what. 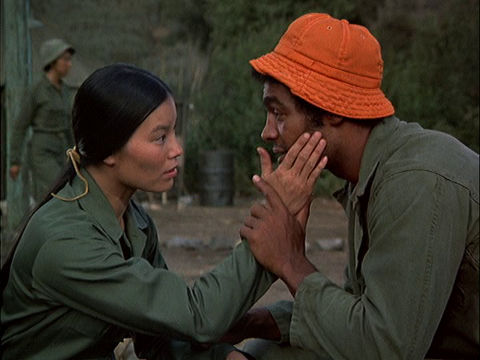 According to the captions, Leslie’s little noise as she ducks under the clothesline to give Henry a kiss is a “chirp.” I wonder if that was included in the script or of Linda Meiklejohn made it up on the spot.

This was the first of two appearances by Barbara Brownell as Lt. Jones. The other was in “Love Story.” I wonder if she would have been in more episodes if the decision hadn’t been made to cut back on the number of recurring characters about halfway through Season 1.

Virginia Ann Lee (credited in this episode as Virginia Lee) later played Kyong Ja in “Exorcism” during Season 5. Her Internet Movie Database profile states she also appeared uncredited in “Welcome to Korea” (Season 4) and some sources indicate she made an uncredited appearance in “Abyssinia, Henry” (Season 3) as well.

We never learn why Sergeant Baker was at the 4077th. All we know is he was looking for Colonel Blake. When Hawkeye tries to pull rank on him, Baker refers to himself as a transient, which I believe means he was only temporarily staying there and did not technically fall under the chain of command.

10 Replies to “Episode Spotlight: The Moose”