It’s not often that an episode of M*A*S*H surprises me, given that I’ve seen them all many times. But this one did. I was ready to write off Major Ross as just another buffoonish foil for Hawkeye because I had completely forgotten how the episode ends. Having Ross turn out to be a nice guy (and seeing Hawkeye get his comeuppance) made rewatching this episode more fun than usual.

Still, I wonder if most viewers watching “Tea and Empathy” for the first time felt the same way I did, that Major Ross was too exaggerating to be taken seriously. Although he’s ultimately redeemed, was his first appearance too much bluster and brimstone?

Father Mulcahy is often at his best when he actually has something to do and he certainly had something to do here. It’s always fun to see the 4077th’s man of the cloth as a man of action but it wasn’t very believable that none of those bullets hit him or Klinger even if the black marketeers weren’t actually aiming for either of them. I doubt they were sharpshooters who could hit the jeep so accurately.

I didn’t actually time out how long they were both on screen but it felt to me as if Hawkeye took something of a backseat to B.J. in this episode. Was this the only episode to feature a patient addicted to morphine? There was a tremendous amount of drinking on M*A*S*H but very little drug use.

Margaret and Charles were little more than an afterthought here. This was one of several Season 6 episodes that seemed to be pushing the two towards a romantic relationship, although that may be reading too much into things. “Tea and Empathy” was the 17th episode of Season 6 to air but was actually produced ninth so the writers were still getting a handle on Charles. At this point he was pompous and snobbish and little else. 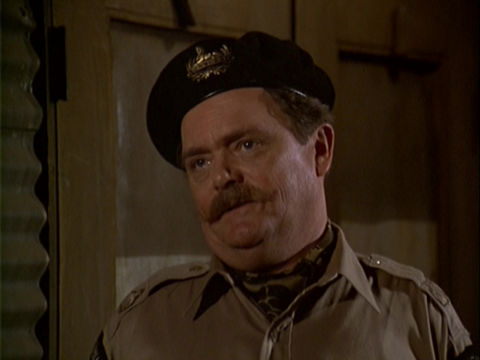 Major Ross isn’t what he seems

Radar is not in this episode.

The British unit in this episode is the Gloucestershire Regiment (known as the Glosters). They were earlier referenced in “Smilin’ Jack” during Season 4.

Sal Viscuso, who played Corporal Benny Bryant in this episode, was one of the uncredited voices of the PA on M*A*S*H. This was his third and final appearance on the series; his previous guest appearances were in “Dear Sigmund” and “Post Op” (both during Season 5).

According to Jay Pirelli’s Internet Movie Database profile, his only acting role was in this episode. He played Michaels, one of the British soldiers.