Capsule Summary: Hawkeye pretends he’s lost touch with reality in order to get some R&R.

This is a really good episode even if the plot is implausible and the ending contrived. It helps that it features Marcia Strassman’s third appearance as the lovely Nurse Margie Cutler. I can’t believe Frank fell for Hawkeye’s wacky shenanigans even if Trapper was working hard to sell Hawkeye’s insanity. Maybe Frank didn’t believe him. Maybe he was just in enough shock to initially agree before coming to his senses. Margaret doesn’t appear to have believed Hawkeye was actually nuts.

That said, if any of us were in Frank’s shoes hearing Hawkeye talk about eating a North Korean’s liver, maybe we’d be a little shocked, too. Larry Linville did a wonderful job with his reactions in this scene. Trapper and Radar didn’t seem very surprised or disgusted, which should have raised some flags with Frank.

I’m also not sure any man in 1950, even Hawkeye, would have so openly joked about being in love with another man to a psychiatrist. Hawkeye was sure Captain Sherman would realize he wasn’t serious but it seems like a dangerous road to go down.

As for the ending, it’s easy to overlook how far-fetched Hawkeye and Trapper’s plan to get rid of Captain Sherman was because it was such a hilarious plot. What are the odds he wouldn’t realize he was in the wrong tent? It wasn’t that dark and Margaret’s tent looks nothing like the VIP tent.

The best part of the episode for me is the very real argument between best friends Hawkeye and Trapper after they return to the Swamp and discover the Still empty. Trapper’s “And don’t call me knucklehead!” is perhaps my favorite line, followed closely by Hawkeye’s “Whoever the them, we were always us.” 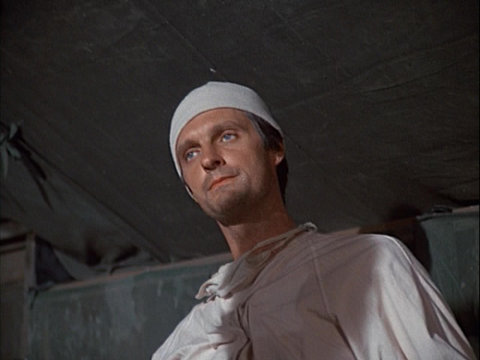 “I don’t think I needed that.”

Father Mulchay and Klinger are not in this episode.

Why was Margaret wearing her dress uniform (without the shirt, tie, or hat) in the Mess Tent?

It was real regular army of Colonel Blake to so smugly ignore Hawkeye and Trapper as he left for his own vacation.

I wonder how long it took to get the shadow on the wall in Margaret’s tent just right. And was it really Loretta Swit providing the shadow?