Capsule Summary: Radar learns to spin vinyl to keep up morale during a deluge.

I think I know at least one regular visitor to this site who really likes this episode, or at least Radar’s DJ persona of Big Daddy O’Reilly. And with good reason. This is an excellent episode with a lot to praise and very little to criticize. It’s may not be laugh out loud funny from start to finish but everybody has a role to play plus it features Double Cranko.

Parts of this episode are vaguely reminiscent of Season 2’s “Crisis” in which many characters were forced to bunk together due to supply lines being cut. That’s about as far as the similarities go, however. “Your Hit Parade” doesn’t dwell as much on sleeping arrangements, with the obvious exception of poor Charles. There are four distinct plot lines, including Radar the DJ, the drunk bomb disposal sergeant, Charles looking for a place to sleep, and Colonel Potter’s sentimental journey.

I’ve made comments in the past about feeling uncomfortable watching certain episodes in which Radar is depicted as particularly naive or innocent. This isn’t one of those episodes. His evolution over the course of just 25 minutes from a confused company clerk trying to raise morale by playing records to a cool cat disc jockey is hilarious.

Watching Charles wander the compound dragging around his cot trying to find a place to sleep is likewise enjoyable. I particularly like how he dropped his cot across Hawkeye and B.J.’s cots in Colonel Potter’s tent only to leave in a huff when they put their feet over him. We never learn if he finds a place to bunk down for the night. He’s not seen again once he leaves Margaret’s tent. 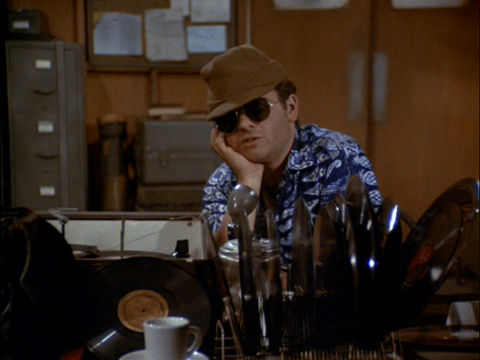 This episode is notable because the writer, Ronny Graham, also made a guest appearance as the drunk Sergeant Gribble. Graham also served as Program Consultant during Season 6 so he actually receives three different credits in this episode. I wonder if there’s a good story about how he got a role in the episode. This was the first of seven episodes Graham wrote. During Season 7 he became Story Consultant and he remained with the series in that role until halfway through Season 8.

Interestingly, despite hearing “Sentimental Journey” three different times during this episode, we never once actually hear Doris Day singing, only the orchestra playing.