Capsule Summary: Charles tries to defend Klinger at his court martial while Hawkeye and B.J. hope to find the real thief and clear Klinger’s name.

I didn’t rewatch “Snap Judgement” before watching the second half of M*A*S*H‘s third and final two-parter. I did read over my September 2013 review of that episode which not only reminded me of the plot but also how much I disliked the episode. Unfortunately, “Snappier Judgement” is no better than “Snap Judgement.”

Like the first part, “Snappier Judgement” has just one storyline — Klinger’s court martial — with related plot points involving every character. For much of the episode the action is split between those taking part in the actual court martial and those left behind at the 4077th.

Charles volunteering to defend Klinger at the court martial is classic Charles and it is understandable that Klinger would agree. How can you argue with someone who has the word “win” in their last name? Seeing Charles try his hand at lawyering could have been amusing. Instead, Charles turns into a buffoon and it’s anything but funny. It’s embarrassing to watch and I have to wonder how David Ogden Stiers felt about those scenes.

Margaret’s performance during the mock trial in Klinger’s office is likewise embarrassing. Her laughter is actually disturbing, likely the result of some sort of mental breakdown rather than a reaction to the “testimony” Charles had written for her. Her laughter is also more than a little insulting to Klinger.

Hawkeye and B.J.’s plan to offer up an expensive tape recorder as bait for the real thief makes a certain amount of sense. The way they went about it, however, is absurd. Shouting about it in the at the mess tent, in the showers, and at Rosie’s Bar? Really? How did they know that the thief was even someone at the 4077th? They didn’t realize that all of the thefts took place during surgery until after the court martial was underway. 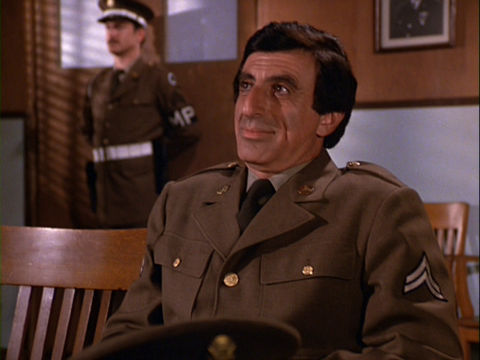 Nobody noticed a huge and growing pile of explosives behind the mess tent? Nobody thought that was unusual or out of place?

How were Hawkeye and B.J. able to set up the phony surgery that flushed out the thief? Did they call ahead?

For some reason the first scene of the episode, right after the recap ends, is very grainy for approximately 57 seconds before abruptly clearing up.