Capsule Summary: Colonel Potter and Hawkeye head to a Korean Army hospital to deliver supplies and lend a hand in surgery.

I suppose, given the title of this episode, I can be forgiven for thinking “Hawkeye Get Your Gun” was the episode with Hawkeye’s famous “I will not carry a gun” speech, which was actually delivered during “Officer of the Day” in Season 3. Once Hawkeye and Colonel Potter were in their foxhole, I was certain the speech was right around the corner. I was wrong.

Hawkeye not wanting to take his sidearm along on the trip was certainly in character. He didn’t even like touching it. B.J. didn’t have the same reservations, however. Aside from the brief mention in this episode to basic training, I don’t believe we ever really learn anything about what sort of military training the doctors received after being drafted.

Presumably they all had at least rudimentary training with firearms, even Hawkeye. He didn’t seem to know how to handle his pistol in the foxhole, although to be fair he was drunk and probably didn’t pay much attention during basic training.

The highlight of the episode is without a doubt Colonel Potter and Hawkeye talking after surgery at the Korean Army hospital. Watch Harry Morgan’s facial expressions during reaction shots while Hawkeye is trying to get him to fall asleep by saying the word sleep three times.

I can’t be the only one who finds it unrealistic that Potter and Hawkeye would get drunk during the ride back to the 4077th? Ignoring the fact that drinking and driving is dangerous under the best circumstances, they’re driving through unfamiliar and dangerous terrain. They were told by MPs that the area isn’t secured. A man with Colonel Potter’s experience would know definitely better and even Hawkeye would probably think twice before drinking.

What’s with Frank’s bizarre preoccupation with Colonel Potter’s age? I think it would have worked a little better during the early part of Season 4 when Potter was first introduced. But in Season 5? Why would Frank suddenly decide to start worrying about Potter’s age after working with him for so long? Nevertheless, it is amusing.

Klinger’s king of the gypsies act is a particularly good one and his total commitment to the Zoltan persona was admirable, with the one exception of his total surprise after drawing a straight while reading the future in cards with B.J. 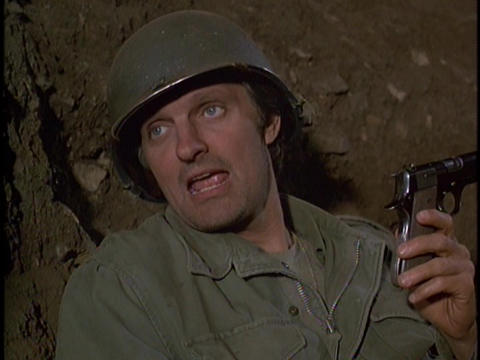 Neither Radar nor Father Mulcahy appear in this episode. Radar’s absence is mentioned in the episode: he has a four-day pass and left an annoyed Klinger as temporary company clerk.

Why didn’t Colonel Potter and Hawkeye go with the U.S. Army patrol that came upon their foxhole? Even if it was going in the wrong direction they were safer with the soldiers than stumbling around on their own.

Mako made his second of four appearances on M*A*S*H in this episode as Major Choi, who is familiar with the work of old Ferret Face.

Fans of Arrested Development may get a chuckle out of Hawkeye and Major Choi saying “annyeong” (the captions have it spelled “anan-nyung”) when Hawkeye and Potter drove away from the Korean hospital. It means both hello and goodbye.

7 Replies to “Episode Spotlight: Hawkeye Get Your Gun”