Capsule Summary: Colonel Blake returns from more than a week in Tokyo madly in love with a beautiful 20-year-old civilian clerk typist.

This is the 126th entry in the Episode Spotlight series of reviews here at MASH4077TV.com, which is about as close to halfway through the series as you can get. The very first episode I reviewed was “Major Ego” back in January 2013. There are 125 episodes left to go and by my estimate that means the final episode won’t be reviewed until October 2017.

Anyway, “Henry in Love” is an episode with a plot both thin and weak. It’s thin because there’s really not much going on other than Henry announcing he’s in love with Nancy Sue Parker and everyone else reacting to his announcement and later reacting to Nancy Sue Parker herself when she visits. It’s weak because a) Henry’s infidelity was nothing new, and b) it’s hard to believe even a sometimes buffoon like Henry would seriously believe he had fallen in love with 20-year old.

The thin and weak plot don’t matter, though. This is a superb episode from start to finish. McLean Stevenson really gave it his all to sell the 44-year-old Henry first as head over heels in love and then as remorseful and thankful. Kathrine Baumann did a fantastic job as the perky Nancy Sue Parker, especially that cheerleading routine.

It’s interesting that at no point does anyone bring up Henry’s past infidelities. In fact, after he tells them about Nancy Sue Parker, Trapper and Hawkeye act like this is the first time Henry’s ever cheated on his wife. Or maybe they were just stunned at his proclamations of being in L-U-V. Maybe they meant this was just the first time he’d had a week-long fling in Tokyo.

The best parts of this episode are the reactions. Watch Margaret’s face during Frank’s speech. Her expressions are brilliant: adulation, confusion, approval, dismay, and shock. Then there’s Radar’s stupefied stare upon seeing Henry’s dyed hair and later his befuddlement at meeting Nancy Sue Parker. I’m particularly fond of the look on Nurse Sheila’s face while watching the cheerleading routine not to mention Trapper’s reaction.

Radar putting in a call to Lorianne may have reminded Henry that he loves his family (and kept him from learning about Nancy Sue Parker’s infatuation with Hawkeye) but it certainly didn’t make him any more faithful in the long run. 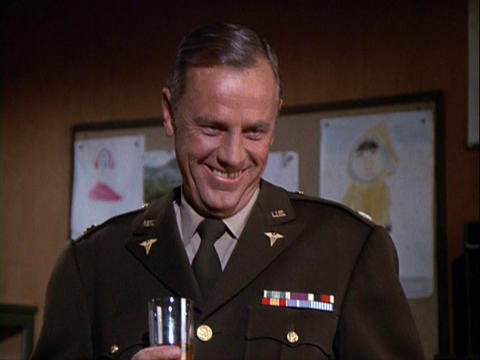 I can’t decide which is better, Henry’s “Well, goombye, people” or Hawkeye’s “Gloriosky, Henry.” Of course neither top Frank’s “It’s nice to be nice to the nice.” I’m sure I’m not the only M*A*S*H fan who’s managed to work that into conversations in real life.

It’s obvious that Nancy Sue Parker’s arrival and departure were filmed at the same time. She’s wearing the exact same outfit and the barrette in her hair hasn’t moved an inch.

While in command of the 4077th Frank apparently had most of the rocks laid out around the compound painted red, white, and blue.

In November 1980, Kathrine Baumann guest-starred in a two-part episode of Trapper John, M.D.