Capsule Summary: Hawkeye is forced to amputate the leg of a soldier who in civilian life was a star football player. Frank, meanwhile, cooks up a boxing match between Klinger and Zale.

This is an episode where I am split right down the middle in terms of how I feel about it. The A story involving Sgt. Billy Tyler is incredibly well done and M*A*S*H at its finest. The Klinger/Zale B story is corny at best and just plain lousy at worst.

As is often the case, I wish less time had been devoted to the B story so there would have been more time to flesh out Billy’s story even more. For example, it would have been interesting (and potentially dramatic) had the soldier Billy tried to get to on the battlefield had ended up at the 4077th as well. Would Billy have blamed him for losing his leg? That could have added another dimension to the blame game, with Billy forgiving Hawkeye but finding another person to blame. Perhaps Hawkeye or Radar would have had to help him realize nobody was to blame.

This wasn’t the first episode to involve a wounded soldier wanting to commit suicide. What was unusual here was for Billy to tell Hawkeye not to save him if his leg couldn’t be saved. It wasn’t just losing the leg but what losing the leg represented and how it would impact his life. Most soldiers would be angry and depressed over losing a leg. To Billy, it meant losing his career, his passion, his livelihood. This would be revisited to a degree in “Morale Victory” in Season 8.

The feud between Klinger and Zale was never explained, which of course makes it more amusing. Unless I missed something Klinger never points out that Zale wasn’t participating in the fight at Rosie’s Bar. Despite what he told Frank about being great at eye gauging, I doubt very much he got his hands dirty. That could have defused the situation quickly. Of course, it’s possible Klinger didn’t want to defuse the situation.

There were a few good bits in the B story, though. Klinger’s retort to Zale’s “buzzard beak” comment is priceless: “If my dog had your face, I’d shave his butt and teach him to walk backwards.” And Frank’s comeuppance was nice to see as always. Still, the manner in which Klinger and Zale collectively redirected their anger at Frank made no sense. When Hawkeye went to try to talk them out of fighting one another, they almost came to blows. Yet when the bout started they had agreed to turn against Frank? When did that happen? Why did that happen? 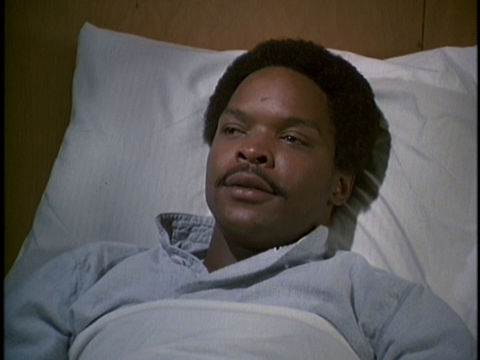 Colonel Potter is noticeably absent from the bulk of the episode, no doubt due to the fact that Harry Morgan was directing. This was the second of nine episodes he directed; the first was “The Novocaine Mutiny” in Season 4.

I’m not sure I like the opening sequence in which Billy being wounded is intercut with the right in Rosie’s Bar. I understand why it was done, to juxtapose the senseless reality of war with an even more senseless bar fight, but seeing Billy wounded, treated and shipped off to the 4077th while Klinger is crawling around under tables trying to keep his hat on somehow feels wrong. Which is probably the point.

When Billy is being loaded onto the ambulance at the end of the episode he clearly has two legs.

The fight in Rosie’s Bar is a little overdone if you ask me. The stuntmen went all out. Granted, I’ve never been in a bar fight but this one didn’t seem realistic at all, especially that one who very obviously jumps into the air so he can be “thrown” across the room by another soldier.

Can anyone with eagle eyes identify the issue of LIFE that Radar shows Billy? Actually, is there any way of knowing if it is really an issue of LIFE at all?