If you are or were in the Army, or are otherwise familiar with how ranks and promotions work in the Army, this episode may seem ludicrous to you. According to the trivia section for “Promotion Commotion” at TV.com, nearly everything about the promotion board depicted in this episode was inaccurate. M*A*S*H often played fast and loose with certain military and/or Army regulations, so it’s no surprise that things were quite right in this episode. It would have taken the entire episode to properly explain and depict actual promotion board.

Nitpicks about accuracy aside, it was nice to see Klinger promoted to sergeant, continuing his evolution from crossdressing Section 8-seeker to valued member of the 4077th. The timing of the actual promotion felt a little rushed but that’s also understandable. Klinger’s solution to the Hitalksi problem doesn’t make any sort of sense, however. Not only was it far too neat and tidy, there would have been some sort of investigation that ultimately would lead back to the 4077th and Klinger because nobody would believe Hitalksi could have forged his own travel documents.

(I can’t recall if this was the only “promotion” episode of M*A*S*H, not counting “Lt. Radar O’Reilly” or the various episodes in which Father Mulcahy was upset about not being promoted. Colonel Potter makes it sound like promotion boards were regular things, and refuses to let Margaret serve on this board because she’s already done it recently. At first I thought there was an early episode in which Klinger tried cheating to get promoted but eventually realized I was thinking about “Soldier of the Month” which was not about a promotion.)

The B story about Colonel Potter befriending young Private Danielson would have been more believable if Danielson didn’t look so old. He was supposed to be a very young, very naive soldier fresh from the States (much like Radar, come to think of it) but he looked quite a bit older. It made it hard to take a lot of what he was saying seriously. Ron “Ronnie” Howard way back in Season 1’s “Sometimes You Hear the Bullet” looked like a young soldier. 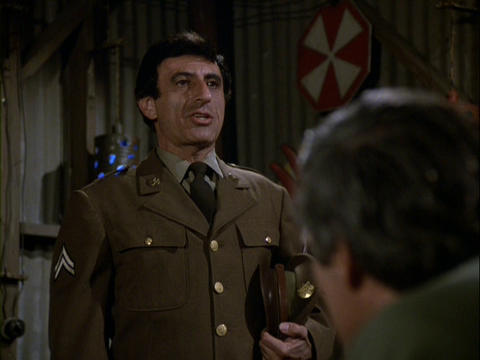 Hawkeye should have been less concerned about Igor trying to bribe him and more upset about the fact that Igor (or whoever was cooking) was clearly capable of producing better food than the regular mess tent slop but only when it suited him. That cake was obviously very tempting and yet Hawkeye didn’t seem at all curious as to where it came from or why it was possible for the cook to even create such a delicacy.

This was the first of two episodes in which Deborah Harmon played Nurse Webster. The other was “Hey, Look Me Over” from Season 11.