Capsule Summary: While Klinger works on launching a newspaper, Hawkeye builds a tower out of 500,000 tongue depressors.

While Klinger’s enthusiasm for his “MASH Notes” newspaper may at times have felt over-the-top, for the most part this is a solid episode. Hawkeye’s destruction of his monument to senseless destruction is very well done as is his motivation for doing so. M*A*S*H is often criticized for becoming too maudlin and moralizing in its later years. I don’t think that’s the case here at all. The absurdity of the Army sending the 4077th half a million tongue depressors sets Hawkeye off and that makes sense.

Sure, it’s a mistake. Colonel Potter knows that. B.J. knows that. Even Hawkeye knows that. But it still represents, to Hawkeye at least, how the Army — and by extension the United States government — doesn’t see soldiers as individuals. His conversation with B.J. in the Officers’ Club about how the Army considers doctors and soldiers interchangeable is superb, particularly when he runs down the list of past and present characters, symbolically snapping the tongue depressor representing the late Henry Blake.

The Hawkeye and Klinger storylines are intertwined, making it hard to decide which is the A story and which is the B story. Despite what Colonel Potter said, the newspaper was just another scam for Klinger. That’s fine but his eagerness was overkill. It was just too much. Part of me wants to believe that Charles only agreed to write the gourmet food column because he was bored. Otherwise that means Klinger was able to trick him quite easily. On the other hand, Charles is such a snob that he probably would be easily tricked by Klinger. 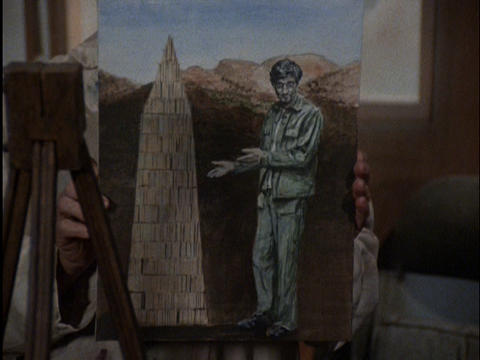 There’s a relatively well-known anachronism in this episode. Watch closely 17 minutes in just as the delivery truck drives off. Hawkeye and B.J. are seen walking towards the boxes of tongue depressors. Alan Alda is wearing a pair of bright blue sneakers obviously from the 1980s. Mike Farrell, on the other hand, is wearing period-appropriate Chuck Taylor All-Stars.

Some of the nurses at the start of the episode seem to be having quite a bit of fun tossing bedding around.