Capsule Summary: While Father Mulcahy prepares for a visit from an Army cardinal, Hawkeye grapples with how to tell a wounded soldier he has leukemia.

This episode may be best remembered for guest starring the late Patrick Swayze a number of years before he became wildly famous for his roles in films like Dirty Dancing and Ghost. His character, Gary Sturgis, serves as a bridge between the A and B stories. The title clearly refers to the friendship between Sturgis and the severely wounded Dan, and the offer to donate blood that leads Hawkeye to discover Sturgis has leukemia. I suppose that makes it the A story.

I had forgotten that Sturgis had leukemia and for some reason thought he had hepatitis and was just upset he could not donate blood to his friend. That would have made for a very different episode and would have meant not seeing Hawkeye try to decide what to tell Sturgis, worrying that knowing his fate would alter how he spent his last months. B.J. asks Hawkeye whether he’d want to know. Hawkeye’s response is deep: “Would you want to tell me?” Ultimately he decides to tell Sturgis, which was probably the right thing to do.

Father Mulcahy’s B story had some laughs courtesy of Rizzo and Igor, but was like the A story primarily dramatic. This wasn’t the first episode to involve a visit to the 4077th by someone higher up the Army’s religious food chain (I’m thinking of Ned Beatty’s Colonel Hollister in Season 4’s “Dear Peggy”). There were moments while rewatching the episode when I felt William Christopher was perhaps overdoing it just a bit with his reactions, particularly his speech in the Officers’ Club when Roy and Dennis are fighting.

I’m also torn on how to take Father Mulcahy’s sermon. It worked well up until he “revealed” that he was the first man in his story and then it got a little too emotional. We know from other episodes that Mulcahy sometimes felt unappreciated at the 4077th and by the military (or at least wondered if he was doing any good) so it fits that he would worry that he was looking for recognition from Cardinal Reardon.

Perhaps he decided after sitting up all night talking with Sturgis that by trying to shut down the craps game for a few days or asking Igor to take down the portrait of Mona, he was only trying to impress Reardon. After all, he didn’t want to stop the craps game forever. Was his aim to make the 4077th look good for Reardon or himself look good? Maybe that realization led to his emotional sermon. 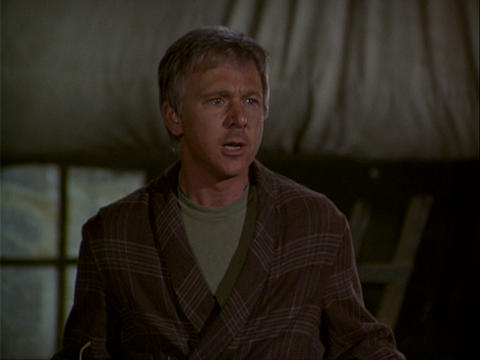 It’s a rare episode when Rizzo has more screen time than members of the main cast. David Ogden Stiers had so little to do in this episode that until I went back and checked I thought perhaps he had directed it. Imagine my surprise to discover it was in fact Harry Morgan directing. Margaret has a very limited role as well. Klinger’s is only slightly larger.

I think my favorite line in this episode is Rizzo’s response to Father Mulcahy in the supply tent:

“Father, please, try and see my side of it. What if peace is declared tomorrow and they ship us all home before I have time to shear these sheep?”

The best scene, however, has to be the introductions after Cardinal Reardon arrives:

Has the pin-up of Mona always been behind the bar in the Officers’ Club? Also, I wonder if it is an actual Korean War era pin-up or something the art department cooked up?

I can’t be the only one who thought Cardinal Reardon really wanted a drink when he first arrived at the 4077th. Why else would he keep asking about the Officers’ Club?