Capsule Summary: When an Amerasian baby is left anonymously in front of the Swamp, the 4077th goes to great lengths to try to secure a good home for her.

This is a rare episode that only features one storyline. Unfortunately, spending so much time on a single storyline didn’t work in the episode’s favor. This probably would have gone over much better had it only been one of multiple storylines rather than the focus of an entire episode. It’s not a terrible episode, although I think everyone can agree that it is too heavy-handed at times.

Story editor Dennis Koenig had this to say about “Yessir, That’s Our Baby” in Suzy Kalter’s The Complete Book of M*A*S*H:

There was a show that didn’t turn out great but dealt with a very important story, That’s My Baby [sic], about Amerasian babies. It was a tough story to do because it dealt with an issue we had a tendency to overlook–what we did to the Korean people by being there. These kids were never accepted in Korean culture; they were shunned by society and had no future.

That M*A*S*H overlooked the plight of Amerasian babies until Season 8 is part of the problem with this episode, in my opinion. Watching the episode you get the feeling that the producers decided to tackle the topic because they realized M*A*S*H had been on the air for eight years and they hadn’t covered Amerasian babies yet, rather than doing so because it fit naturally into an episode.

(The issue of Amerasian babies was glossed over for the most part in Season 2’s “The Choson People” which saw a South Korean woman lie about Radar being the father of her baby. Although she later admitted that her own family had ostracized her, at the end of the episode she and her baby were readily accepted by a group of South Korean refugees (although one could argue they might not have known her baby was Amerasian).

Having only one storyline meant every single character had to be shoehorned in somehow. That actually worked quite well for nearly everyone. Margaret and Klinger didn’t really have much to do but their roles were believable. At least with everyone reacting to the baby in what could be described as an extreme fashion, nobody really felt all that out of character.

Except for Charles, that is. While it’s certainly reasonable that Charles would care and worry about the baby, his outburst at Roger Prescott was painful to watch, mostly because it was so bluntly telegraphed that the normally calm and refined Charles would eventually snap.

To sum up, there’s nothing wrong with the topic of the episode but the execution feels forced and, yes, perhaps too preachy. 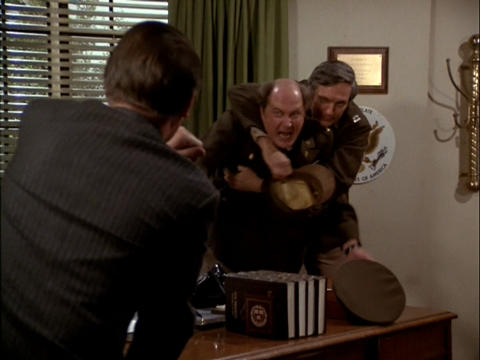 “Run for your life, Prescott! It’s a wild boar!”

The closing credits contain the following:

It’s never mentioned in the episode but how did everyone at the 4077th know that the father of the baby was actually an American?

After Hawkeye and Colonel Potter were told by Chung Ho Kim that other countries like France and The Netherlands were far more accepting of babies of their military, I’m a little surprised nobody thought about trying to trick one of those countries into accepting the baby.

Howard Platt, who played Major Ted Spector, revealed in TV’s M*A*S*H: The Ultimate Guide Book by Ed Solomonson and Mark O’Neill, that he got the role at 10PM the night before his scenes was filmed and didn’t receive the script until 1AM that morning. I wonder who was originally supposed to play that character.

Colonel Potter compares the milk-filled surgical glove to “the business end of a Guernsey” which the Internet tells me is a breed of cattle.