Capsule Summary: Colonel Potter learns some disturbing news about his son-in-law while Hawkeye and B.J. try to convince Charles that he snores.

Neither of the storylines in this episode are great and even superb acting by Harry Morgan and David Ogden Stiers can’t save them. M*A*S*H was pretty tired by this point and unfortunately this episode just doesn’t deliver. My recollection of Colonel Potter’s A story with his son-in-law turned out to be wrong twice. For some reason I was under the impression that Bob Wilson admitted to Potter that he had cheated on his wife rather than Potter finding out on his own. I also thought no explanation was given for how Bob ended up visiting the 4077th when in fact it was explained in detail how much red tape had to be cut through to get him there.

Still, it’s not entirely believable that a civilian would be able to travel to a war zone just to visit his father-in-law. It was one thing for Margaret’s father, a retired military man, to show up in Season 9’s “Father’s Day” but Bob? It would have made more sense for Potter to travel to Tokyo to meet up with him. There really wasn’t any need for him to come to the 4077th other than to allow the two to have their final man-to-man chat about infidelity.

Actually, there wasn’t any need for Bob to show up at all. Potter could have returned from meeting him in Tokyo, received the phone call revealing the affair, and struggled with what to do all without seeing or talking to Bob. He still could have talked it out with Father Mulcahy and ultimately decided not to tell his daughter. The story of his own infidelity he could have shared with Hawkeye and/or B.J.

Not featuring Bob in the flesh would have meant no Dennis Dugan and I’m okay with that. I never bought him as Potter’s son-in-law or as a husband troubled by a fall of the fidelity wagon. Constantly referring to Potter as “Pop” felt forced rather than familiar. The more I think about it, the more I’m convinced the episode would have worked just as well, if not better, had Bob never shown up.

The highlight of the episode was Potter’s phone call to his daughter. I don’t know if someone was actually feeding lines to Harry Morgan or not but he did an incredible job in that scene. If he was reciting his side of the conversation without any cues, that’s even more impressive. You can hear the emotion in his voice and see it in his face and you know the turmoil he’s going through as he struggles with what to tell his daughter.

It’s too bad Potter later reveals that he, too, had an affair. Part of me wants to believe he made that up because it doesn’t fit with his character at all. That’s the point, I suppose, that even the best make mistakes, but I still don’t like it.

The B story with Charles and his unrealistic snoring is, well, a snore. It’s remarkable that David Ogden Stiers could do so much with so little. You actually believe that Charles is truly worried that snoring means he’s common and not a true Winchester. It’s ludicrous and bizarre but Stiers makes it seem real. I think William Christopher overdid it a tiny bit when Father Mulcahy reacts with such incredible offense. He should be used to such a snobby, holier-than-thou attitude from Charles and not let it get under his skin. 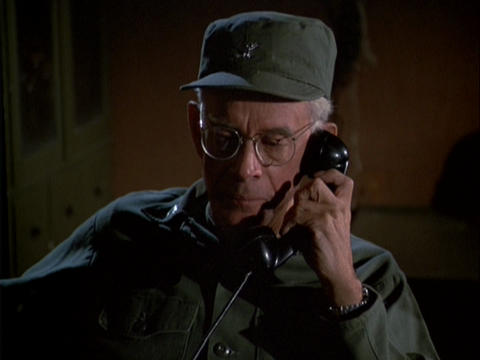 Colonel Potter talks to his daughter

The opening credits to this episode feature a truncated version of the theme song which in my opinion ends a little too abruptly.

This was the second episode Dennis Dugan appeared in. He previously played Private Danny McShane in “Love and Marriage” during Season 3.

Colonel Potter’s daughter Evvy would later appear in an episode of AfterMASH (“Thanksgiving of ’53) during its first season. Curiously, her husband in that episode was not named Bob Wilson (and not played by Dennis Dugan) but instead Bruce Ennis and their son was named Corey, not Stuart.

This was the last of five episodes directed by Mike Farrell.