Capsule Summary: A friendly but sick chopper pilot is willing to risk everything to break a record.

This was the eighth episode produced for Season 4 but the 22nd aired. I think it shows. The writers were still getting used to writing for new characters which could explain why so much of the episode focuses on Jack Mitchell. Colonel Potter is fleshed out a bit but B.J.’s role is limited. The end result is an episode that feels unbalanced with a plot that doesn’t work.

Jack’s motivation for risking his life and the lives of four wounded soldiers is his obsession with beating Dangerous Dan’s record of 842 wounded pickups and became Chopper Pilot of the Year. This makes no sense. Unless Dangerous Dan was no longer picking up wounded, beating his record would only be temporary. Jack’s plan was to keep flying until he tied or beat the record and then turn in his wings. It shouldn’t have come as a surprise that Dangerous Dan would quickly beat Jack’s record.

It’s not as if the episode took place on December 31st and Jack was racing the clock to bring in a few more wounded before the end of the year. The P.A. announcement during the tag references the April 1951 Battle of the Imjin River in which the Gloucestershire Regiment (known as the Glosters), 1st Battalion of the British Army’s 29th Independent Infantry Brigade, suffered heavy casualties.

In a June 2nd, 2000 post to the alt.tv.mash newsgroup, Larry Gelbart revealed the genesis of this episode:

After the seciond [sic] season of the series, Gene Reynolds and I went to spend wome [sic] time with the 8055th, still stationed in South Korea. The 8055th, as some of you must know, was the real unit that served as the model for the fictional 4077th.

One of the people interviewed was a chopper pilot named Dan Sullivan[.] A very colorful guy, we created a character for the series based on his experiences. We added a twist by having our fictional chopper pilot fall victim to diabetes. This was purely a creative invention. Sullivan never had that condition.

Sometime after the episode aired, Dan – the real Dan – became afflicted with diabetes.

It was a bizarre case of life being imitated by art only to have art then be imitated in life.

Presumably, the never-seen Dangerous Dan was named after the real Dan Sullivan. I wonder, if the real life pilot was so colorful, why was it necessary to introduce the diabetes angle in this episode? Perhaps making it revolve around Smilin’ Jack was a mistake. Maybe he would have worked better in a smaller role.

The minor B story involving twice wounded Corporal Howard Owens doesn’t add much to the episode other than giving B.J. a chance to butt heads with Frank. Radar bonding with Owens is nice but isn’t very believable. Would Owens really be comforted by a four leaf clover given to him by a company clerk who’s biggest fear is being caught reading African issues of National Geographic? 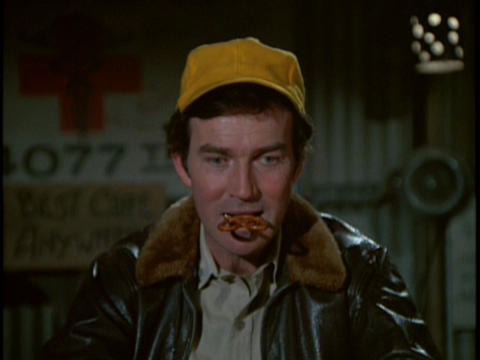 This was the very first episode directed by Charles S. Dubin, the most prolific director on M*A*S*H. He ultimately directed 44 episodes.

Why is Radar dispatching a chopper to Battalion Aid 12 at the start of the episode? That’s not his job.

Colonel Potter knows Jack from the 121st Evac, where months earlier he patched up Jack’s hand before becoming CO of the 4077th.

The actress playing Lieutenant Cathy King, who Frank planned on reporting for smirking, is uncredited despite having six lines.