Capsule Summary: After Klinger saves his life, Charles devotes himself to repaying his debt. Meanwhile, B.J. refuses to admit his hand may have been injured.

I’m sure I must sound like a broken record every time I mention how my appreciation for the character of Charles has grown over the past few years. That made rewatching this episode a delight. The A story involving Klinger and Charles offers plenty of lines that are Charles at his best. That said, I don’t like the tag scene in which Charles makes a pun using the last name of author Mickey Spillane. That’s beneath Charles.

Klinger probably could have strung Charles along for a few more days if he hadn’t asked for too much each day. And why did he ask Charles to read to him? That was more than pushing his luck, that was just stupid.

The B story also spun out of the autoclave accident. I can’t decide whether B.J. stubbornly insisting his arm is fine was out of character or not — B.J. usually had a pretty good head on his shoulders and should have been willing to accept an examination — but Hawkeye’s reaction to Captain Traeger didn’t feel right.

There was no reason for his immediate hostility towards Traeger. Even if he was worried about B.J., all Traeger did initially was try to take a look at B.J.’s arm, but for some reason that set Hawkeye off. It didn’t help that Traeger was such a one-dimensional character. There was a glimmer of substance when he mentioned being the world’s oldest draftee but that was it. 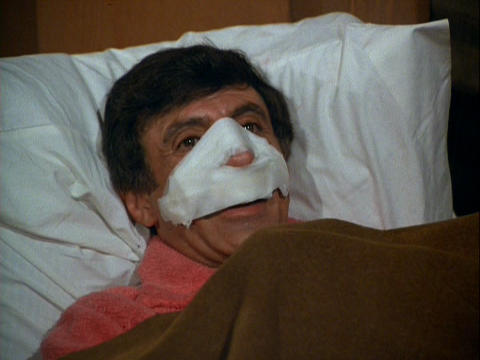 “Every broken nose has a silver lining.”

Tim O’Connor, who portrays Captain Traeger in this episode, earlier played Colonel Spiker in Season 4’s “Of Moose and Men.”

I love the exchange between B.J. and Hawkeye in the Swamp right after Traeger leaves:

Watching it is so much better than reading it. You miss the laughter and the facial expressions. It’s a great scene.

This is the second M*A*S*H episode to include the word operation in the title after “Operation Noselift” from Season 2. Both involving noses. Coincidence?

Speaking of noses, there are a lot of jokes about the size of Klinger’s nose, including Potter making a crack about needing a wide-angle x-ray lens and Hawkeye telling B.J. that “Klinger has damage over 50% of his body. He broke his nose.”

Margaret and Father Mulcahy have very little to do in this episode.