Capsule Summary: During a heat wave Hawkeye and B.J. try to get their hands on a racy movie.

You can’t really say this is an episode about military bureaucratic incompetence (like “The Incubator,” for example) because it’s not really incompetence but rather the brown-nosing Major Frankenheimer’s disdain for unimportant front line medicos that initially keeps Hawkeye and B.J. from getting The Moon Is Blue for the 4077th. Add to that the honest mix-up that took place after Colonel Potter stepped in and tried to help.

Considering the lengths he went to get the film, it’s no wonder Hawkeye was so livid when it finally arrived and turned out to be far less lurid and explicit than he hoped. Too bad he didn’t listen to Charles when he explained that being banned in Boston doesn’t necessarily mean much. The Moon Is Blue was released on July 8th, 1953 only weeks before the Korean War ended. Is it realistic that prints would make their way to Korea so quickly? I doubt it.

If getting the movie is the episode’s A story, I’d say the B story has to be the placebos. They worked well for Bannister, helping him conquer his fear of talking to women, but failed to keep Klinger cool once he learned the truth. While the placebo effect is well documented scientifically and has been known to do some incredible things, does anyone know whether it has been shown to work with oppressive heat and humidity?

Also, supposedly once someone is told they’ve been taking placebos, any improvement goes away. That’s what immediately happened to Klinger. Bannister, however, didn’t fall apart or at least we didn’t see him start sweating. One can only hope he was able to go out on his blind date. Good on Potter for figuring out a way to replace the placebos by telling I Corps they were stolen.

The C story involving General Rothaker’s prohibition doesn’t add much to the episode other a little more misery for the camp. Without booze, the heat was even more unbearable. The 4077th should count itself lucky that Potter planned to lift the prohibition once Rothaker left. 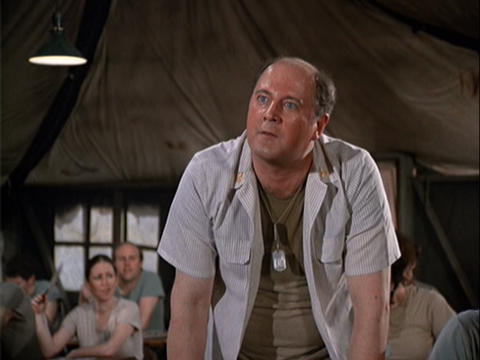 “Those are my beans!”

This was the last of six holdover episodes producing for Season 10 that were broadcast as part of Season 11.

Does Major Frankenheimer look familiar? He should. Hamilton Camp previously played the nutty Corporal “Boots” Miller in “Major Topper” back in Season 6.

The best line of the episode goes to Charles: “My, my. What has become of your wino’s Erector set?” Unfortunately, the worst line goes to him as well: “Those are my beans!” The bingo scene has to be the weakest part of the episode. At least it gave Igor something to do.

21 Replies to “Episode Spotlight: The Moon Is Not Blue”