Capsule Summary: Mail arrives at the 4077th and causes all sorts of problems.

Letters were a big part of M*A*S*H from the very start, both letters home and letters from home. “Mail Call” was the first of three episodes to revolve entirely around the 4077th receiving mail from home. There’s so much going on in this episode I’m not sure where to start. Every character gets at least a brief subplot relating to mail from home with the exception of Father Mulcahy.

Klinger faking a letter from his mother telling him his father is in a coma is classic Klinger. Henry pulling out a file filled with letters about various deaths (and pregnancies) in the Klinger family is hilarious. “Here’s an oldie but a goodie: half of the family dying, other half pregnant.”

The most emotional subplot has to be Trapper’s. The cookies and photograph he gets from home lead to him getting increasingly upset about how much he is missing being in Korea while his daughters grow up. His confrontation with Hawkeye while planning to go AWOL is revisited more violently with B.J. in “Period of Adjustment” during Season 8.

Poor Frank. He struck it rich with his investment in Pioneer Aviation and then lost it all when he learned it wasn’t a real company. He almost lost Margaret, too, after planning their lives together without consulting her, but managed to get her back. But he didn’t really lose any money, which means his stock portfolio still doubled.

Radar’s pen pal problem was the least interesting of all the letters but he learned a valuable lesson about honesty. I hope Henry managed to balance his wife’s checkbook and find a way to pay the $236 veterinarian bill (that was a huge amount of money in the 1950s). Maybe he had enough left over for a visit to Madam Wank’s Casa de Massage.

Margaret and Hawkeye also received mail. Margaret got new hosiery and spiked heels while Hawkeye got a sweater with a guest room from his sister. As most M*A*S*H fans know, aside from occasional references like this one during the first few seasons, Hawkeye was always an only child. 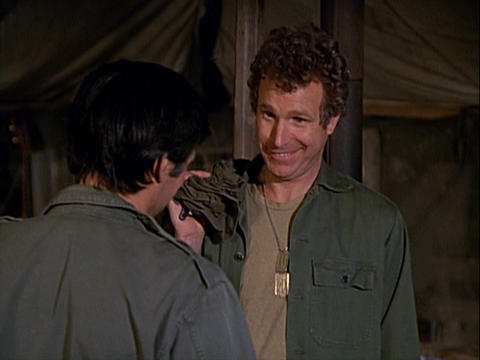 Trapper prepares to use violence

This was the first episode that Alan Alda directed.

Radar getting mobbed and losing his clothes is a weak gag, in my opinion. It would have been more impressive if there wasn’t a shot change to hide the fact that Gary Burghoff removed his clothes rather than Radar actually having them torn off.

Do people actually remove the pits of olives the way Hawkeye was while listening to Trapper talk about his kids? I guess he could have been practicing surgical techniques.

Notice Igor and a nurse looking bewildered in the background when Margaret is screaming about Pioneer Aviation and Franks runs out of her tent.