Capsule Summary: Hawkeye and B.J. call in Sidney Freedman to help with a medic suffering from amnesia. Meanwhile, Charles vows to never talk to anyone at the 4077th again.

The A story in this episode involving Sergeant Jerry Nielson is an emotional one. And a superb one. I got goosebumps watching the scene in which he reveals under hypnosis that he found his little brother dead in a bunker on Hill 403. Actor Kevin Geer did an incredible job playing Jerry. Would you believe this episode was his first credited film or TV role, at least according to his Internet Movie Database profile?

Ken Levine explained in an August 2012 blog post that the amnesia storyline was based on actual research. He praised Alan Alda’s directing and noted the climactic hypnosis scene was “the most dramatic” he and writing partner David Isaacs ever wrote. The two went to great lengths to ensure it was as realistic as possible:

David and I got together with a prominent Beverly Hills psychiatrist I knew and he walked us through the hypnosis process step-by-step. We used some of the doctor’s lines verbatim.

Hypnosis is such a tricky area. It can come off very sketchy. We all took great pains to treat it seriously and portray the scene accurately. Again, my thanks to Alan for directing that scene with such sensitivity.

Levine is right. At times it does almost feel like Geer is overacting as he screams and yells while under hypnosis. But then you remember you’re watching a character relive finding his brother dead and you realize something that traumatic can’t ever be faked by any actor. It’s the quiet that really gets to me, when Hawkeye and B.J. stop the sound effects and Jerry breaks down in silence.

As is usually the case when there’s a very dramatic, very emotional storyline the B story here doesn’t fit quite right. It’s a little absurd that Charles would resort to the silent treatment for the entire camp after learning he was out of the running for a prestige position at Massachusetts General. That’s something Frank would have done but seems just a bit too childish for Charles, a little too whiny. Pulling the Swamp down on Hawkeye, B.J., and Sidney on the other hand, was classic Charles. 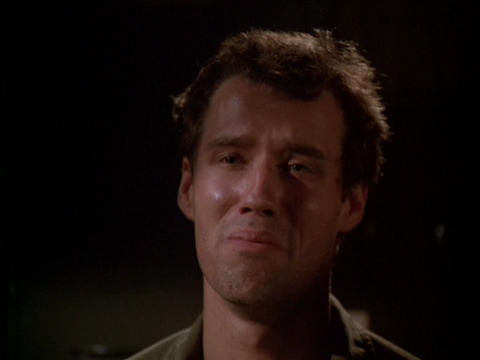 Where did all the trash Klinger was picking up at the start of this episode come from? It’s obviously paper so it wasn’t leftover from triage. The 4077th is generally depicted as a pretty clean place. I do love Klinger’s line “Major, it’s up to us to keep Korea beautiful.”

I hope Radar eventually got to look at Hawkeye’s copy of the October issue of Nudes Illustrated.