Capsule Summary: A world-class runner is assigned to the 4077th so Klinger suggests a bet with the 8063rd. Meanwhile, Charles befriends a wounded engineer with a stutter.

There are many who feel M*A*S*H was a little tired by its 11th year but it doesn’t really come across that way in this episode. About the only weary part was Klinger confusing the out-of-shape Jessup McFarland with his son the sprinter, leading Margaret, Hawkeye, and B.J. to once again become furious with their scheming company clerk. But as Colonel Potter points out, that’s just Klinger being Klinger. Once he gave up wearing dresses all he ever did was scheme.

The A story here is obviously the race. There was probably a simpler way to pit Father Mulcahy against the 8063rd’s Jackrabbit but that would have left Klinger without much to do. Cutting out the whole McFarland plot point would have also meant more time devoted to Charles and his B story, which could have been nice. Klinger getting his comeuppance by having to give all his winnings to the orphanage was fitting but what about poor Hawkeye, B.J., and Margaret? They lost everything, too, and weren’t to blame for the situation. That was Klinger. B.J. losing a week’s pay meant Erin might not get new shoes.

It was a nice touch to have Earl “Jackrabbit” LeMasters turn out to be a decent guy, willing to throw the race to help orphans. Considering how unpleasant the 8063rd’s commanding officer and head nurse were, it would have been easy to have Jackrabbit be obnoxious as well. Hopefully he didn’t get into any trouble for losing to the 4077th.

The best part of the episode, of course, is the B story in which Charles befriends the stuttering Private Palmer, who doesn’t seem to have any friends. Even his CO dislikes him. While it may seem a little heavy-handed that his fellow soldiers and his CO made fun of him, given the time constraints of a 30-minute episode it was necessary. We see just enough of Palmer to realize that he has low self-esteem, thinks he’s dumb, and just wants to be left alone (probably because few people in the Army have ever been nice to him).

This wasn’t the first time Charles showed his compassionate side and, as always, it’s very nice to get to see Charles drop his holier-than-thou attitude and act like a human being. His brief exchange with in the Mess Tent (“Klinger, you don’t have to suck up to me. I didn’t bet and I don’t like you anyway”) was the perfect parallel to his reaction to Captain Sweeney insulting Palmer.

Learning that Honoria stutters explained why Charles was so nice to Palmer and so infuriated with Captain Sweeney. But was it necessary? Did we need an explanation? 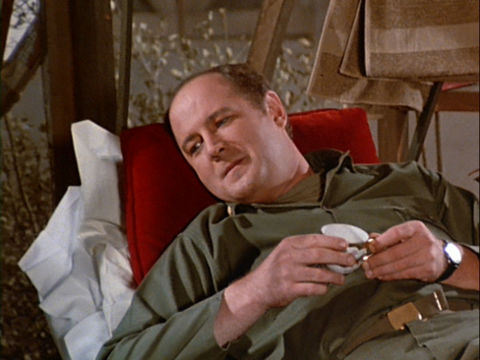 Charles listens to a tape from his sister

Mike Farrell was involved in providing the story for this episode along with Elias Davis and David Pollock, who wrote the script. According to this website, scriptwriter Elias Pollock was given a special award by the National Stuttering Association (NSA) in recognition for his work on this episode and a copy of the script was auctioned off at a fundraiser.

David Ogden Stiers made a few guest appearances on The Mary Tyler Moore Show in 1976 and 1977 as a station manager with who stuttered, which actually led to him getting the role of Charles on M*A*S*H.

There are a lot of MASH 4077 clothes seen in this episode. Father Mulcahy wears a MASH 4077 tank top, B.J. a t-shirt, and Margaret and Hawkeye have on sweatshirts. None were olive drab, however. We do see some nurses wearing olive drab t-shirts while Colonel Potter is chatting with Father Mulcahy before the race.

Speaking of clothes, I wonder how many of the MASH 4077 and MASH 8063rd tank tops and sweatshirts were made specifically for this episode? We see a number of them on background characters.

17 Replies to “Episode Spotlight: Run for the Money”