Capsule Summary: A colonel with a high casualty rate arrives to visit his men and Hawkeye goes to drastic measures to ensure he can’t endanger any more lives.

The script for this episode was famously altered to reflect Mike Farrell’s real-life reaction to the idea of doctors removing a healthy appendix from Colonel Lacy. The conflict between Hawkeye and B.J. in this episode stands in stark contrast to the joy with which Hawkeye and Trapper removed Colonel Flagg’s appendix in “White Gold” (Season 3). Alan Alda and Farrell talked about their argument over the script in “Making M*A*S*H,” a 1981 PBS documentary about the series:

Alan Alda: “And wouldn’t it make a good scene to be that passionate and animated over that very point in the show? I agreed it was wrong but felt the characters were under such stress that my character would do it because he felt that it was the only way to save dozens or hundreds of lives.”

Farrell: “And let me point out that this didn’t come out of whole clothe. This came out of the research we did.”

Alda: “And the interesting thing is the real doctors who really did take out the appendix never argued about it in real life. They just went ahead and did it. But it was important to take Mike’s position and play out that soul searching in a heated way and it gave us one of the best scenes we had all season because we used something real that happened among the real actors.”

Alda also discussed the episode in a November 2011 episode of America in Primetime, a PBS series about the history of television:

Well, at the rehearsal for this, Mike Farrell said ‘I’m playing a doctor who takes this seriously and I will not operate on a patient who doesn’t need the operation. That’s mutilation.’ And we started an argument that lasted about an hour that day. And at a certain point we said, you know what? This is what we ought to be doing on camera because this is a serious conflict.

There appears to be a fair amount of controversy within M*A*S*H fandom surrounding this episode, with strong feelings about B.J. opposing the operation as well as Hawkeye going through with it. Was B.J. being too preachy (something Hawkeye was often accused of)? Did Hawkeye cross the line?

The ethical questions about whether removing Colonel Lacy’s appendix to save lives overshadows the fact that the episode doesn’t work very well. Hawkeye and B.J. disagreeing about taking Lacy out of the action does add to the episode but otherwise it feels like little more than a series of plot points. Lacy is a very one-dimensional character whose motivations for wanting to take the hill are unclear and who is appropriately slimy, icy, and detached. Margaret is attracted to him but then quickly turns against him to align with the prevailing opinion that he is a horrible person.

Also, there’s no way Hawkeye could have performed the surgery on his own but that was never addressed. He must have had a nurse to help him at least, which would mean official paperwork. Presumably B.J. would have to go along with Hawkeye’s diagnosis in order to protect him, which would no doubt mean lying to Colonel Potter.

More than anything, the lack of repercussions or any lasting effects from Hawkeye going through with the operation temper the impact of the episode. Hawkeye doesn’t seem haunted by his actions in later episode nor does B.J.’s opinion of his friend change in any way. That said, there was rarely continuity between episodes of M*A*S*H.

The more you think about this stuff and the the farther you take it, the less things make sense and the harder it is to see the episode as a standalone story.

Klinger’s “occult” storyline is glaringly out of place in this episode. It’s not even an afterthought. It’s total nonsense, obviously included to somehow force Klinger into the episode. The same goes for inserting the scene between Margaret and Charles in line at the Mess Tent. It adds nothing to the episode. I wish Charles had instead been involved in the conversation between Hawkeye and B.J. about removing Colonel Lacey’s appendix. 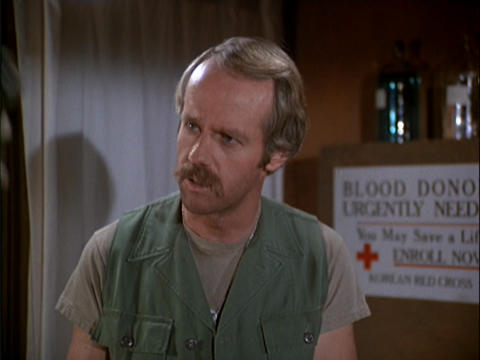 B.J. won’t go along with Hawkeye

Was Charles mistakenly calling Igor a corporal before correcting himself and referring to him as a private a goof on the part of David Ogden Stiers? Or was it a deliberate act on the part of scriptwriter Tom Reeder to emphasize how little Charles cared for enlisted men like Igor?

When Klinger is outside the Swamp talking to his little Colonel Potter doll, two corpsman can be seen looking at him and talking in the background, obviously sharing a laugh about that nutty Klinger.

Why was Radar so eager to please Colonel Lacy?