Capsule Summary: Mail call brings Colonel Potters news of a grandchild, Frank news of a divorce, Hawkeye a newspaper with lots of news, and Radar a home movie

This was the second of three Mail Call episodes, although there were certainly more than three episodes featuring letters from home. What I find most interesting about this episode is just how small Hawkeye’s role is. He pops up occasionally to read a bit of news from the Crabapple Cove Courier but otherwise has little to do with any of the storylines. The same goes for B.J., who has no real storyline of his own.

Colonel Potter’s grandchild storyline and Frank’s divorce storyline are probably tied for the A Story. The baby pool thought up by Radar is a nice way for the camp to celebrate the arrival of Potter’s grandchild. We don’t see a lot of people placing their bets but I think we can assume everyone got involved considering how popular pools have been in other episodes. I wonder how much Father Mulcahy won?

Frank’s divorce storyline really brings out the worst in ole Ferret Face. His reaction after convincing Louise not to divorce him — and perhaps more importantly confirming he is still in her father’s will — is about as slimy as Frank ever gets. Not only did he still have Louise and her family’s money but he assumed he also still had Margaret. Little did he know she was listening in on the conversation.

What does everyone think of Radar’s home movie? Watching his family eat wasn’t nearly as exciting as seeing Frank or Henry’s home movies. I’m also not convinced having Gary Burghoff portray Radars mother was a great idea. Maybe Jamie Farr was happy to finally see someone else in drag but it really pulls me out of the episode.

I do like Klinger’s attempt to get a discharge for being his family’s only surviving son even if it was reminiscent of a similar scheme he pulled on Colonel Blake in the first “Mail Call” episode in Season Two. The story he came up with was so detailed and yet Klinger had to have known there was no chance of it working. But he still put in the effort.

B.J. and Father Mulcahy also get letters but we don’t hear much about them. Margaret doesn’t get a letter but does receive a package from Frederick’s of Hollywood, which ties into Frank’s divorce storyline. 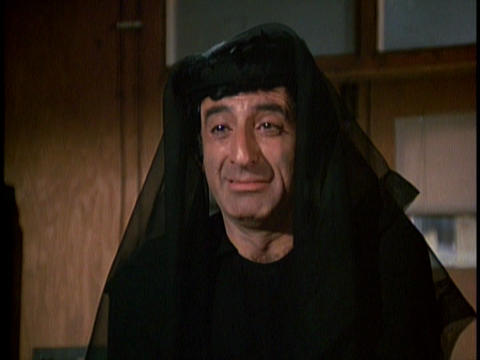 Poor Klinger has lost his brothers in a tragic accident

There’s only one guest star credited in this episode: William Christopher as Father Mulcahy. Nurse Kellye is seen in the Mess Tent smirking at Margaret but she doesn’t have any lines.

Hawkeye trying to figure out how to properly say “shaving mugs” is hilarious.

It wasn’t until the episode was over that I realized there were no scenes in the O.R.