Capsule Summary: While Hawkeye, Father Mulcahy, and Radar work to put together a bris ceremony, Colonel Blake worries that his wife is cheating on him.

After I finished rewatching this episode, I realized there’s not much to say about it. There’s nothing particularly interesting or noteworthy about nor did anything strike me as particularly controversial. I certainly don’t think it’s a bad episode. It’s just sort of bland. A solid, run-of-the-mill episode.

That said, the tag scene in which Hawkeye and Trapper ride off on a white horse to practice for their Shetland pony provided one of my very favorite bloopers from M*A*S*H. I can’t find it on YouTube, unfortunately, but it’s a brief shot of Wayne Rogers trying and failing to jump up onto the horse behind Alan Alda, who laughs and says “I think we’d better practice again.”

Some viewers might wonder why nobody said anything to Colonel Blake about his infidelity while he was wandering around worrying that Lorraine might have cheated on him. He was without a doubt acting very hypocritically but I think that’s the point. He’s initially thrilled to have permission from his wife to horse around, which is a little slimy, but the thrill quickly turns to suspicion and then depression.

He references the movie Brief Encounter in his conversation with Lorraine. Unless I’m mistaken, the characters in the film stop themselves before actually committing adultery. So what exactly is Lorraine admitting to on the phone? An emotional affair? We don’t really know.

Frank and Margaret don’t have much to do in this episode and their plot to photograph the circumcision as proof the two are performing an elective surgery is a bit thin. It’s a little disturbing to see Frank snapping pictures while Hawkeye’s performing the actual circumcision.

Father Mulcahy, on the other hand, is quite busy between helping with the bris and worrying about his sister the Sister wanting to leave the order and maybe have a baby. She doesn’t, of course, but it’s nice that he was able to come to terms with her wanting to and give her his blessing.

I do love Hawkeye and Trapper spending the entire episode trying to find the 10 presidents so they can get their pony. It’s a pretty absurd thing to do but it’s fun. They either never found the tenth president or the whole thing was a scam because we never see the pony. 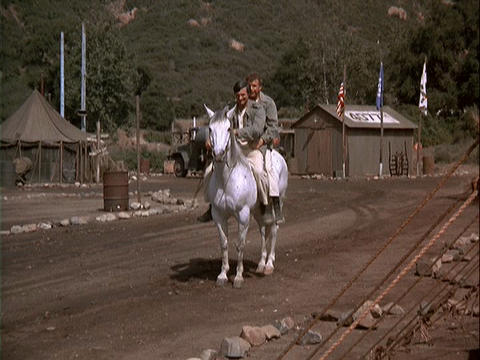 Hawkeye and Trapper practice for their pony

While trying to figure out who the baby’s father could be, Hawkeye and Trapper mention a Lieutenant Forbes and a Captain Forrest. Some people think this is a reference to Duke Forrest, a character present in the novel MASH and the film but not the TV series. I’m not sure. Duke Forrest was a general surgeon but Trapper says Captain Forrest was a brain surgeon “who fell down a lot.”

Speaking of Captain Forrest, Hawkeye mentions he’s been gone over two years, which would place this episode pretty far into the Korean War.

Trapper tossing around a football while walking back to the Swamp is random. It sounds like he calls out to someone named Doug. Was this Doug just standing around with a football waiting for someone to play catch with?

Klinger doesn’t appear in this episode.