There are parts of all three storylines in this episode that I really like and parts that I don’t think worked. It’s tough to say which was the A Story so I’m not going to try. I’ll just talk about them one at a time starting with Colonel Potter, Sophie, and Mr. Pak. I’d never really thought about it before but I don’t think it is realistic that the commanding officer of a MASH unit in Korea would have a horse.

It definitely doesn’t seem realistic that he could leave camp for a ride, with no way to contact him, and show up not just late but four hours late. What if wounded had arrived or some sort of emergency? And where exactly could he go for four hours? The 4077th was always supposedly to be pretty close to the front, right? It wouldn’t have been safe to wander too far from camp.

I’m also not convinced that Colonel Potter would have given Sophie away to Mr. Pak. Unless he thought Mr. Pak was close to death and he would be getting Sophie back soon. But that’s a bit ghoulish and doesn’t fit with Potter’s character. It’s more likely he didn’t give it much thought and decided to give Sophie to Mr. Pak in the heat of the moment. It would have been very interesting had this plot been carried over to later episodes but the self-contained nature of M*A*S*H episodes made that impossible. Regardless, it was a beautiful gesture on the Potter’s part.

It was a nice touch to tie Mr. Pak’s storyline to Hawkeye and B.J.’s storyline by having Ham be so in awe of Mr. Pak’s military exploits. Not being able to keep Ham from joining the ROK Army was a rare loss for Hawkeye. Realistically, though, what was he thinking? Was his plan to keep Ham in dresses and hide him in the Swamp forever? He couldn’t go back to his village. I suppose Hawkeye could have raffled off a weekend pass with a nurse to raise money to send Ham to college in the States. That worked out so well for Ho-Jon.

Klinger’s storyline was the weakest of the episode. He really was crazy if he thought Colonel Potter would take a bribe.

The highlight of the episode for me was seeing Charles save the day after walking into the middle of Hawkeye and B.J.’s trickery. It’s unlikely he actually cared much about Ham but even Charles wouldn’t want to see someone dragged off and conscripted. Plus he got to be the hero.

I’ve said it before but I’ll say it again: the need to fit every character into every episode often worked against M*A*S*H. Margaret’s small role may have been amusing but it wasn’t pivotal to the episode. Plus it really didn’t make much sense. Why would Ham have tried to hide in the showers? The same goes for Father Mulcahy, who had only two or three lines. They were funny but it felt like he was just being shoehorned into the scene. 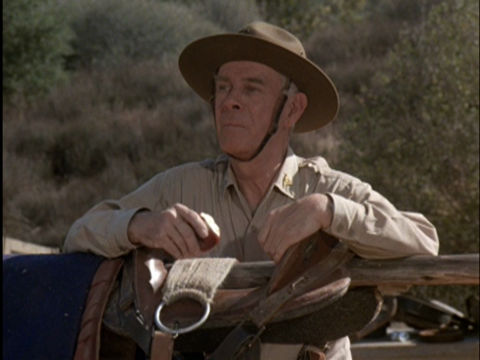 Is it just me or was Radar helping Colonel Potter take off his pants off a little weird? Not to mention Potter’s pink shorts.

When Colonel Potter is riding back to the 4077th we get an unusual angle of the camp showing the back of the Officers’ Club.

Where did Klinger get the cart for his Going Out of Army Sale (per the sign; there’s also one that says No Check)?

Watch carefully around 11:05 and you’ll see a bicycle cross in front of Colonel Potter and Radar with a nurse and a corpsman on it. Extras on M*A*S*H must have had a lot of fun.

Scriptwriter Erik Tarloff would later pen the second episode of Trapper John, M.D. (aired in September 1979) as well as two episodes of House Calls (one aired in November 1981, the other in March 1982). The latter series was a medical sitcom starring Wayne Rogers that aired on CBS M*A*S*H from December 1979 to May 1982.

19 Replies to “Episode Spotlight: The Price”