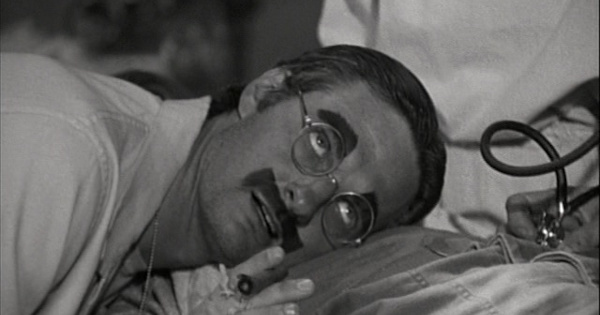 Capsule Summary: Hawkeye and Trapper sabotage an official Army documentary about the 4077th and instead direct and star in their own honest if irreverent film.

I believe this is the first episode I’ve reviewed as part of my Episode Spotlight feature that wasn’t chosen randomly. While watching “Requiem for a Lightweight” (which I reviewed last week) I decided I felt like watching another episode from Season One and settled on “Yankee Doodle Dandy,” which coincidentally also featured Marcia Strassman as Nurse Margie Cutler. Like “Requiem for a Lightweight,” this is another wonderful early episode even if the plot is a bit thin.

This episode marked the first appearance of Herb Voland as General Crandell Clayton. He went on to appear in seven episodes, more than any of the other generals during the first two seasons of M*A*S*H. Clayton was the third general to debut, after Hammond and Barker, but due to episodes being aired out of order an episode with Hammond (“Henry, Please Come Home”) would air before Clayton returned in “Tuttle” later in Season One.

Nobody ever really explains during the episode why a documentary on MASH units is being made, other than a vague desire to inspire viewers back in the United States. General Clayton seems earnest and Colonel Blake wants only to promote the 4077th. We don’t really know what Bricker’s grand vision for the film is, other than what little we hear of Frank’s narration which is bombastic but relatively harmless.

(Speaking of narration, this episode features a rare use of voice over narration on M*A*S*H when Hawkeye says “First, we’ll get a hold of Radar” to Trapper, explaining how they’ll sabotage the film.)

The way Hawkeye and Trapper react to the film, therefore, seems somewhat overblown. It’s an Army puff piece. Bricker may be guilty of caring more about getting his shot than wounded soldiers, and he’s certainly full of himself, but he’s not some devious propagandist.

That said, I definitely prefer Hawkeye’s interpretation. But who’s really the star? Hawkeye’s Yankee Doodle Doctor, inspired by Groucho Marx, or Trapper’s silent, horn-honking sidekick? The party in the Mess Tent is perhaps my favorite part of the film. I love the way Hawkeye and Trapper appear so pious while walking towards the Mess Tent only for it to erupt into a wild party, complete with Cutler dancing on a table, right as they walk in.

I’ve always loved Hawkeye’s line “When they came to get me I was hiding under the front porch trying to puncture my eardrum with an ice pick.” It so perfectly captures the character.

No explanation is given for why Hawkeye and Trapper are dancing together, which makes me wonder whether it was in the original script or added later, perhaps to pad out the episode.

During the scene in which Bricker is introduced to everyone in the Swamp, the shaving cream on Frank’s face changes consistency.

The nurse Bricker is flirting with in the Mess Tent is smoking. It’s one of a very few times a cigarette is seen on the series. Cigars are far more common.