Capsule Summary: The 4077th receives letters from a grade school in Hawkeye’s home town and set about answering them as best they can.

I love this episode. It offers a nice twist on the letter home plot device, allowing our favorite characters to respond to letters from home. It retained the familiar flashback sequences to highlight various goings-on around the camp, including Irving the Alcoholic Dog, Colonel Potter attempting to set a new free throw record, and the story of poor Major Bainbridge.

I will admit that Hawkeye agonizing over how to respond to Ronny’s angry letter about his dead brother was a bit much. His reactions over the course of the episode are typical of later season episodes. The letter and .If the episode had spent just a little less time on that letter, perhaps there would have been room for one or two others. Hawkeye’s re

Here’s a list of all the letters that were replied to in the episode:

Irving the Alcoholic Dug is just a bit too cutesy for my taste. It’s too bad M*A*S*H so rarely referenced earlier episodes. Rather than Mulcahy recounting to Stacy how he cured Irving’s alcoholism he could have told her about the emergency tracheotomy he performed on a wounded soldier in “Mulcahy’s War” back in Season Five. Maybe that would have been too graphic for a fourth grader. He also could have told her about the times he had to assist during surgery.

It’s fitting that Charles is the one to respond to multiple letters given his initial disgust at the idea. Out of everyone involved it’s obvious that Charles got the most out of writing to the students. His first response was sarcastic. His second involved the terrible idea for young Peter to have his father’s suit altered. His third was heartfelt, however. The leaf would have been a nice reminder of home to Hawkeye but to Charles it was even more meaningful. 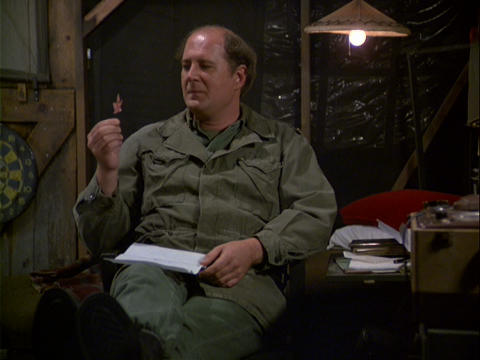 Charles and his leaf

Just how many dogs are there around the 4077th? Look closely during the start of Colonel Potter’s free-throw attempt, when Klinger first approaches him. There’s a white dog with a black face in the background. It’s not Irving.

Charles is wearing the toboggan cap he received from home in “Dear Sis” during Season Seven.

It’s hard to tell but it looks like all of the letters from the students have writing on them. Did somebody in the prop department actually write out the letters? Likewise, who typed out the letter Klinger was supposedly composing on his typewriter?