Capsule Summary: Hawkeye tries to juggle a hot date with helping a soldier marry a South Korean woman with whom he has a child.

Usually in my episode reviews I write a few paragraphs about the plots of the various storylines and then some random comments and observations. With this episode, I’m more interested in the comments and observations than the plot. I’m not a fan of either storyline, to be honest. Hawkeye and Trapper blackmailing Lt. Willis into signing Corporal Walker’s paperwork wasn’t anything special. Neither was Hawkeye’s repeatedly interrupted date with Lt. Hoffman even with its twist ending.

Frank and Margaret aren’t given much to do in this episode but the scenes they are in are quite good, particularly when they’re complaining to Colonel Blake. Margaret talking for Frank never gets old and her slow emotional collapse while listening to Frank talk about the strength of his marriage was classic early series Hot Lips.

There’s so much going on in the opening scene to this episode. Lots of familiar faces. Everyone is in the Mess Tent watching an unnamed movie. Colonel Blake is engrossed in the movie; Trapper is busy with a nurse (Marcia Gelman); Father Mulcahy looks uncomfortable; another nurse (Sheila Lauritsen) is getting very close to a corpsman under a poncho; Radar is in the middle of eating some fried chicken while Nurse Kellye stares at him lovingly; a nurse (Gwen Farrel) has her arm around Klinger, who discreetly covers his knee with his dress; Igor is in the background watching the movie; and Hawkeye is trying to get Lt. Hoffman’s attention.

It’s likely the opening scene was shot either before or after the closing scene in which Corporal Walker gets married because everyone in the background of that scene (Gelman, Lauritsen, etc.) was also in the Mess Tent scene.

There’s a lot of talk about movies throughout the episode. While we never learn what movie the camp was enjoying in the opening scene we do know that the following night they’re going to see Flying Leathernecks with John Wayne, from 1951. The P.A. announcement about Flying Leathernecks also mentions Ward Bond and Maureen O’Hara who actually weren’t in the movie. When that movie doesn’t arrive in time, Colonel Blake decides to show Bonzo Goes to College (a real movie from 1952) as well as The Thing That Ate The Bronx (a fake movie).

Later, after Flying Leathernecks still hasn’t shown up, Bonzo Runs for President (another fake movie) is shown alongside The Thing That Ate The Bronx. Although unconnected to either of the storylines in the episode, I think all the movie talk adds a lot.

Speaking of movies, Trapper calls Hawkeye “Andy” after Hawkeye asks “Dad” for the car. This is a period accurate reference to the Andy Hardy movies released between 1937 and 1946, all starring Mickey Rooney. A final film came out in 1958, long after the Korean War ended. 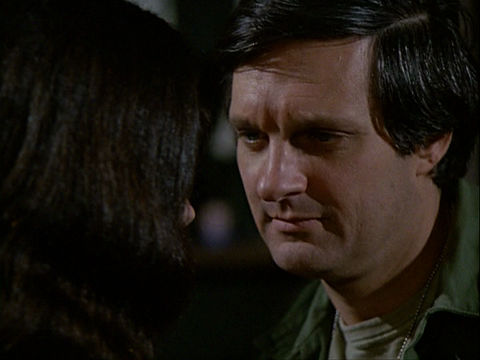 Notice the odd camera angle from behind Frank’s bunk when Hawkeye and Trapper are discussing Lt. Hoffman’s handshake.

When Colonel Blake has his head down on his desk you can see writing on his day planner. As I’ve mentioned many times before, I’m curious about who was responsible for things like this. Did McLean Stevenson scribble out some notes? Was it someone from the prop department?

The book Hawkeye is reading while waiting for Lt. Willis to wake up is Badman’s Roost by Robert E. Trevathan. It was published in 1963.

I spent the entire episode wondering why I recognized the actor playing Lt. Willis, Burt Young. I discovered afterward that he played Paulie Pennino in the Rocky movies.