Capsule Summary: After a thief is caught at the 4077th trying to steal penicillin, Colonel Flagg shows up trying to disrupt a penicillin ring.

This is, in my opinion, a mediocre episode with moments of sheer brilliance courtesy of Edward Winter as Colonel Flagg. Every scene he’s in is brilliant. The highlight of the episode is without a doubt Flagg tossing the tent, smashing a telephone over his head, and preparing to run headfirst into a closet. Winters probably could have carried the scene by himself but is helped by some terrific background music.

Likewise, the opening scene in which Johnson (aka Perkins) and his two companions sneak through the 4077th to get to the Supply Tent would have been pretty dull if not for the highly unusual music used to give the scene a little atmosphere. We’re given a rare look at the Stage 9 set from behind many of the tents, looking out towards the Swamp.

This was the fourth episode to feature Winters as Flagg (if we count his appearance as Captain Halloran in “Deal Me Out” as one of Flagg’s many aliases) and there is a nice bit continuity between episodes when Trapper mentions Flagg breaking his own arm, which happened twice during “A Smattering of Intelligence” in Season Two. Hawkeye also refers to Flagg rigging a jeep so he could run over himself. I don’t recall ever seeing that.

I can’t decide which Flagg line in this episode is my favorite. I’m torn between “My orders are to do whatever I have to to break up this penicillin ring. I have written permission to die in the attempt” and his response of “Give us time” when Frank suggests the CIA can’t supersede the orders of the President.

Hawkeye and Trapper’s plan to drug Flagg, causing him to present with symptoms of appendicitis, and remove his healthy appendix to keep him off his feet for a few days, would be revisited in “Preventative Medicine” in Season Seven. In that episode, Hawkeye went through with the surgery but felt guilty afterward while B.J. refused to participate. In this episode, Hawkeye and Trapper were downright gleeful as they prepared to remove Flagg’s appendix. 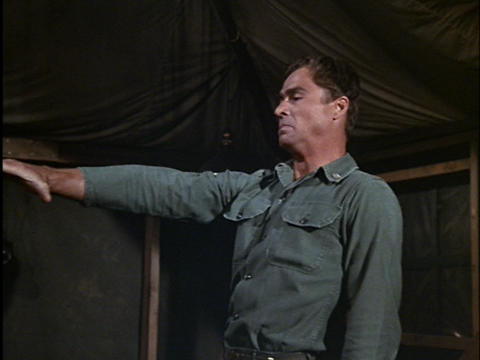 This was the first of two guest appearances by Hilly Hicks, who played Perkins/Johnson in this episode and Corporal Moody in “Post Op” during Season Five. Hicks had previously appeared in the short-lived CBS sitcom Roll Out during the 1973-1974 season, which was created by Larry Gelbart and Gene Reynolds.

Colonel Blake seemed a little confused when Flagg walked in pretending to be Captain Goldberg. Were the glasses really that effective a disguise? Father Mulcahy also seemed to believe Flagg was a Jewish rabbi.

Why was Frank playing with a pipe while guarding Perkins/Johnson? He doesn’t smoke.