Capsule Summary: Hawkeye meets a soldier gone AWOL at Rosie’s and along with B.J. decide to start their own country called Rosieland to escape the war and the Army.

I’m not sure what’s more unbelievable about this episode: that Colonel Potter would allow his entire senior staff and others to disappear from the 4077th; that it would take Charles two hours to track down Hawkeye when it was time for the Officer of the Day switch; or that there would be absolutely no repercussions for anyone involved in the rise and fall of Rosieland. Hawkeye and B.J. get away with tying up and gagging Charles and the destruction of Rosie’s Bar while Sgt. Scully gets away with deserting his unit.

According to Ken Levine, this episode was a last-minute replacement when the planned Season Seven finale in which Gary Burghoff would depart the series was pushed to Season Eight. Levine and his writing partner David Isaacs wrote “A Night at Rosie’s” in a weekend, using the opportunity to script an episode set at just one location: Rosie’s Bar. Although it was the last episode produced for Season Seven, it was not the last aired.

The episode hits a high point when Colonel Potter finally shows up and chews out Hawkeye and B.J. Either they’re too drunk or too selfish to realize what he’s talking about when he tells them he needs respect. His response to their apology (“You think that helps, don’t you?”) is a wonderful line, as is his prediction that they won’t remember much of anything the following day. It’s too bad their actions in this episode were never brought up again by Potter. And nobody ever mentioned the fact that patients could have been at risk with Hawkeye, B.J. and Charles at Rosie’s Bar.

“A Night at Rosie’s” introduced Jack Scully, played by Joshua Bryant, who would return in “Guerrilla My Dreams” and “Stars and Stripes” during Season Eight as a love interest for Margaret. She fell for him pretty quickly in this episode, fawning over his broad shoulders and his strength. Had he appeared earlier in the series, Hot Lips may have found him attractive but would have turned him in for being AWOL. Margaret, while shocked to learn he had deserted, cared enough to help him elude the MPs. Hawkeye and Rosie were the only other people who knew Scully was AWOL. Hawkeye didn’t mind while Rosie was only worried about MPs showing up.

Once again, the need to include the entire cast meant forcing characters into the main plot. Klinger’s craps game added very little and removing it could have given Father Mulcahy more to do. Or, had both Klinger and Mulcahy been written out of the episode, Margaret’s romance with Scully could have been expanded. Likewise, Radar’s subplot involving Major Dorsett, while amusing, could easily have been left out. 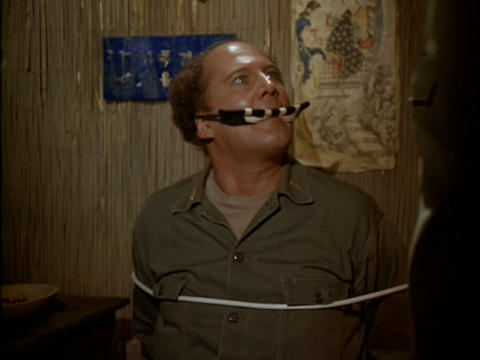 I do like the minor role played by Charles (“Now I demand a full apology even though I will never accept it”) but as I mentioned it isn’t at all believable that Colonel Potter could talk Charles out of pressing charges against Hawkeye and B.J. Not only did they tie him up and gag him, they also sat on him.

“A Night at Rosie’s” marked the first appearance of Eileen Saki as Rosie. The character was earlier played by Shizukuo Hoshi in “Mad Dogs and Servicemen” in Season Three and then by Frances Fong in “Bug Out” (Season Five) and “Fallen Idol” (Season Six). Saki would play Rosie in a total of seven episodes, the last of which was “Snap Judgement” in Season Ten.

Scully introduces himself as Sergeant Jack Scully while the closing credits refer to him as Sergeant Jerry Scully.

20 Replies to “Episode Spotlight: A Night at Rosie’s”