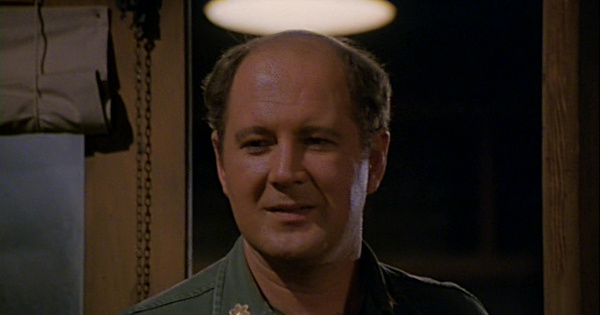 Capsule Summary: While Colonel Potter is at a conference, Charles is left in charge. Meanwhile, Hawkeye tries to help a soldier whose mother back home is going to be deported.

The word bland may best describe this episode. Maybe repetitive, too. I think even the actors were tired of saying they were tired of surgery, which explains why the opening scene in the O.R. falls flat. It sounds like Mike Farrell and Alan Alda are the ones who want to hang tags on their eyelids or sleep for three straight days, not B.J. and Hawkeye. There are only so many ways to describe the special kind of exhaustion that comes after marathon sessions of meatball surgery and by this point in the show’s run they had all been used. The A Story also feels tired (pun intended) and reminiscent of any number of earlier storylines involving Hawkeye battling the military.

What makes this episode a little different is that Colonel Mulholland was more of a mean-spirited bully than an incompetent bureaucrat. While at first it seemed like Private Van Liter was caught in a vicious loop of red tape — having been told by his commanding officer to talk to the Red Cross and by the Red Cross to talk to his commanding officer — we eventually learned that Mulholland is cruel and vindictive, an over-the-top villain.

Hawkeye, of course, devised an over-the-top solution: a rambling call-to-action he hoped to publish in Stars and Stripes that would force the military to let Van Liter go home a week early. For someone who had spent so much time around the military, it was very naive of Hawkeye to think the letter would ever see print. His reaction upon learning that Mulholland was suppressing the letter therefore feels somewhat unbelievable. But there’s no stopping Hawkeye once he’s in full crusade mode. At least we had B.J. with a few zingers to try to knock Hawkeye down a few pegs.

The B story worked better. Charles using Klinger as his personal shopper was perfectly in character, as was the zeal with which Klinger carried out his Most Imperial Majorocity’s wishes. I would have preferred to see Charles actual try to support Hawkeye rather than cower in the face of potential military prosecution but that would have been too much to ask. Although we know Charles can actually be a nice person, he’s also something of a coward. Unlike Frank, though, Charles never really pretends not to be a coward. He just considers it self-preservation, not cowardice. I believe this is the only time we see Charles in command of the 4077th.

Given how little they had to do in this episode, I wish Margaret and Father Mulcahy hadn’t been included at all. It would have given more time to the Charles/Klinger storyline.

Klinger’s attempt to duplicate Pvt. Van Liter’s circumstances by telling Colonel Potter his parents were divorcing and his mother was going to be departed was one of his last schemes to get out of the Army.

This was the sixth of nine episodes directed by Harry Morgan.

11 Replies to “Episode Spotlight: Tell It To The Marines”