Capsule Summary: When Colonel Potter and Charles come down with the mumps, a temporary replacement surgeon is called in who seems like a good fit for the 4077th.

It’s tough to say which of the two storylines in this episode is the A Story. While Newsome’s storyline is certainly more powerful, I think the Colonel Potter/Charles mumps storyline actually receives more screen time. Let’s discuss Newsome’s storyline first. It’s a good one that comes close to working.

We’re introduced to a character who seems to have the proper mix of humor and talent to not only mesh well with Hawkeye and B.J. but also save a lot of lives. Margaret seems interested in him and even Charles is impressed. Before long, we learn Newsome served as a combat surgeon during the was involved with the Battle of Pusan Perimeter (a massive engagement that took place between August and September 1950) and came through it unscathed. In other words, he’s perfect.

Before long, though, cracks begin to appear. Newsome can’t sleep, he seems anxious about getting back into the O.R., has to walk out of surgery to get some air and then simply disappears. He eventually turns up in Colonel Potter’s tent, slumped on the floor rubbing his hands, desperate to get rid of the nonexistent blood on his hands. He’s cracked under the pressure. Newsome needs help the 4077th can’t provide so Sidney Freedman is called. Hawkeye and B.J. are shaken because Newsome seemed as strong as any of them.

Why Newsome fell apart is never explained or even discussed. That’s where the storyline falls apart a little for me. There needs to be some reason for his collapse. Are we to believe that after Pusan he was transferred to a cushy Tokyo position because his superiors didn’t think he was fit for combat surgery anymore? If so, why was he allowed to serve as a replacement surgeon for the 4077th? On the other hand, if he had never had any problems before the 4077th, what was it about meatball surgery that pushed him over the edge? It couldn’t have been worse than what he saw in Pusan. 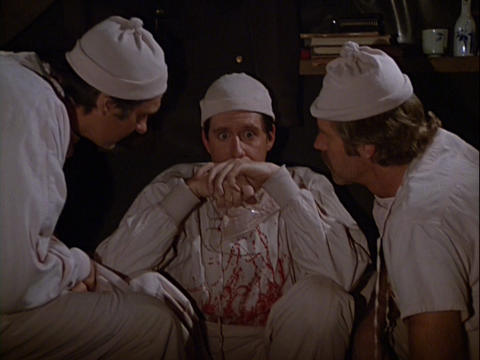 The Colonel Potter and Charles mumps storyline was amusing, if a little predictable in parts, with the two at odds over everything from beds to music. The best part was without a doubt Charles admitting that he was worried about the possibility of not being able to have children due to the mumps and Potter doing a nice job reassuring him. Their angry discussion about music was also a highlight.

Poor Klinger. His precautions and furious disinfecting didn’t do any good. When he walked into Colonel Potter’s tent at the end of the episode it looked like he was carrying at least one or two musical instruments.

This was the third of four episodes directed by Mike Farrell.