Both the A and B stories in this episode were pretty good, even if they involved some unfortunate realities of the Korean War. The A Story involving Mr. Kwang was resolved nicely with the reunion of father, mother and newborn. Left unsaid was what would become of Kwang. Presumably he would be reassigned to another unit by the ROK Army, leaving his wife and child to fend for themselves. This wasn’t the only episode to touch on forced conscription of Koreans by both the North and the South. It seemed a little insensitive of Hawkeye and Trapper to crack jokes about the practice in front of Kwang.

The B Story involving Private McShane’s scheme to make a quick $1,000 by marrying Soong Hi worked mostly due to the hefty involvement of Wayne Rogers. It was nice to see him given something substantial to do. Dugan either overreacted or underacted in most of his scenes but then again his entire squeaky clean persona was apparently an act. Frank liking him should have been a warning sign that he wasn’t who he seemed to be. As with the A Story, the B Story also ended on something of a positive note, with McShane forced to call off the sham marriage. But he probably just went and found someone else to marry for the money, so all Trapper did was delay things.

I have to wonder about the South Korean woman who was constantly pulling on Colonel Blake’s arm. She apparently wanted teeth. I assume she wanted dentures or dental replacements but why would that come up during pre-marital exams? It’s a small but bizarre part of the episode. The scene does provide a great line from Radar (“Well, I’m not supposed to know, but you must know otherwise they wouldn’t want you to sign it”) and another example of just how incompetent Colonel Blake can be at times, signing anything put on his desk.

Also, would Hawkeye really have delivered Mrs. Kwang’s baby on a moving bus or would he have had the driver pull over? Radar’s reactions are over-the-top but amusing and seeing him carried off on a stretcher is a nice touch. 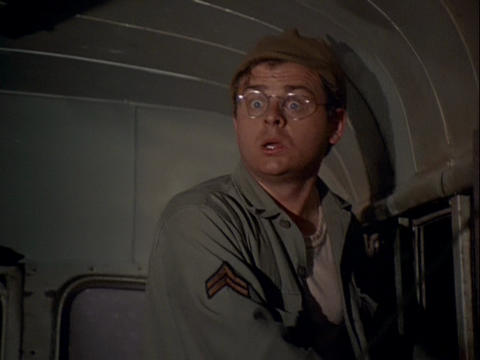 Radar wants to go look for some hot water

I suspect if Wayne Rogers had received more scenes during his years on M*A*S*H like the one he shared with Dennis Dugan in this episode, he never would have left the series. It didn’t involve Hawkeye at all and was a significant part of the B Story.

This episode featured the first of five appearances by actor Soon-Teck Oh (identified in the closing credits to this episode as Soon-Taik Oh) on M*A*S*H, all as different characters. The other episodes he appeared in are “The Bus” (Season 4), “The Korean Surgeon” (Season 5), “The Yalu Brick Road” (Season 8) and “Foreign Affairs” (Season 11). It also featured the fourth of seven different appearances by Jerry Fujikawa. Dennis Dugan would return to M*A*S*H years later, playing a different character, in “Strange Bedfellows” (Season 11).

Hawkeye’s line about it taking a steady hand for a Wassermann is reference to the Wassermann test for syphilis.

Margaret does not appear in this episode. Neither does Klinger.