Capsule Summary: While Hawkeye and B.J. try to stop a chopper pilot from selling war souvenirs, Frank tries to smuggle a priceless Korean antique home to his wife.

There are a lot of overlapping storylines in this episode, most of which involve souvenirs of some sort. The A story, of course, involves Hawkeye and B.J. attempting to shut down Willie Stratton’s souvenir selling business, first by having Colonel Potter give a speech and later by threatening to ground him by falsifying his medical records.

Then there is Frank and his 800-year-old vase, which for him is primarily an investment but can also be considered a souvenir. And finally there is Margaret’s ruby ring, which Frank kept as a souvenir of their relationship. The only storyline not involving a souvenir is Klinger’s latest Section 8 stunt.

Poor Frank. He’s even more of a weasel in this episode than usual, lying to Margaret about having her ring and later begging her to wrestle with him again. Illegally buying a Korean antique doesn’t seem entirely out of character for Frank but why would he have spent $27.75 for the vase before he knew it was priceless? His defense, that someone must have used his face, was pretty pathetic.

How could the vase that ever be confused for a bowl? The M.P. definitely calls it a bowl and then immediately afterward refers to it as a vase.

Klinger’s scheme to sit on a pole until Potter gave him a Section 8 felt like an afterthought. It wasn’t the craziest thing Klinger ever did but it was perhaps one of the more dangerous. Aside from the possibility of catching a cold or coming down with hypothermia (despite the fact that nobody else in the episode seemed bothered by the weather) he doesn’t tie or otherwise secure himself to his platform. He also could have fallen off or been electrocuted if he touched the wrong wire attached to the pole. And how exactly did Klinger hear Potter’s anti-souvenir speech from atop the pole? 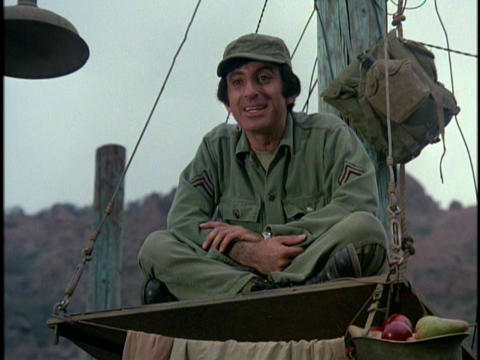 Klinger atop his pole

Do Hawkeye and B.J. follow Frank wherever he goes? Were they waiting hours for him to drop off a package in the company clerk’s office so they could swap the vase for a bedpan?

It’s hard to tell but I don’t think Larry Linville was wrestling with Loretta Swit in the Swamp. It looks like it was a stunt double (probably male) which is why Margaret was wearing a jeep cap.. I could be wrong.

Margaret tells Frank to “Go suck an egg” after getting her ring back. Hawkeye later eats an egg. Coincidence?

Radar is not in this episode. Father Mulcahy only appears in one scene but it’s a good one.

Reinhold Weege, who co-wrote the story for this episode, later created Night Court.