Capsule Summary: Klinger gets himself into trouble trying to help a young South Korean woman; Hawkeye makes a promise to a wounded soldier who later dies on the operating table and has trouble fulfilling it.

Neither of the storylines in this episode are particularly strong. The A story involving Klinger and the misunderstanding that leads to Mrs. Li wanting to perforate him with a pitchfork wasn’t very believable. Despite Oksun Li supposedly serving as translator, Mrs. Li seemed to understand plenty of English when Colonel Potter and Margaret were talking to her, making it hard to understand why someone couldn’t have explained what was going on.

As for the B story in which Hawkeye has to deal with the ill-gotten gains of the late Eddie Hastings, it seemed even more unrealistic. Both that Hastings would be able to acquire so much money without being caught or at least suspected, and that the $8,873 would fit in the money belt he was wearing.

After Hawkeye got the money back from the Hastings, I’m surprised Colonel Potter didn’t say “Well, we tried, time to send it to I Corps” (saving a little to help the Lis move to Pusan, of course). Or that nobody suggested giving it to the orphans that Father Mulcahy was always raising money for. In the tag scene in the Swamp, we hear suggestions like the Red Cross, the U.S.S. Hope, the U.S.S.O. and the A.S.P.C.A. but nothing about the orphans. 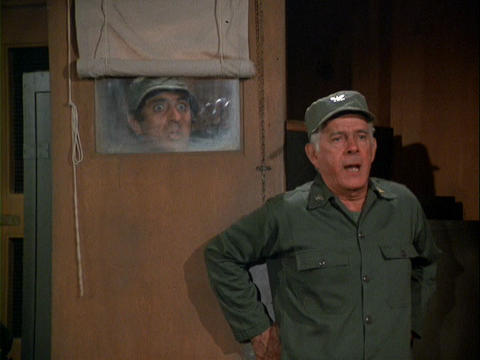 Unfortunately, by this point in the series, comments about the futility of war like those expressed by Hawkeye and B.J. after Hastings died had become almost as tired as the characters looked. As a viewer, hearing the same frustrations from the doctors episode after episode becomes repetitive after a while and they lose their impact.

If you watch closely, after Eddie Hastings dies, you can see his eyes moving underneath his eyelids. Maybe he wasn’t quite so dead.

When Klinger bursts into the Swamp, we see Charles reading and there’s a pretty clear shot of the two pages he has open. There are two pictures and a lot of text. Could be be reading an encyclopedia?

Gary Burghoff is given a special “Also Starring” credit in the opening credits despite not appearing in this episode and having left the series earlier in the season.