Capsule Summary: Margaret prepares for a weekend in Tokyo to celebrate her birthday while Klinger schemes up a lottery around the impending birth of a calf.

For some reason, when this episode came up randomly for review this week, I wasn’t enthusiastic about watching it again. I don’t know why but I had it in my head that I didn’t like this episode. But I do. It’s a good episode with some wonderful interaction between Margaret and Klinger.

This is definitely a Margaret episode. Her upcoming trip to Tokyo is easily the episode’s A story, which makes the pregnant cow the B story, Klinger’s lottery the C story and Charles giving the lecture the D story. The only story that Margaret involved with was the pregnant cow. Her story was intertwined with Klinger’s and served as the impetus for the Charles story.

It’s hard to believe that nobody at the 4077th knew when Margaret’s birthday was, although it fits her character to try to keep that a secret. That said, there weren’t a lot of episodes involving birthdays so maybe the 4077th just didn’t celebrate birthdays much (despite what Margaret said about hers being used as an excuse to get drunk and be rowdy for a few hours). You’d think Colonel Potter would’ve known, at least, from her personnel file. Or even Klinger, being company clerk.

The best part of the episode was the conversation between Margaret and Klinger, during which Margaret revealed that she never attended the same school two years in a row due to her Army brat upbringing, and that caused her to eventually stop letting people get close to her out of fear of being hurt. The two rarely shared scenes together, other than Margaret yelling at Klinger as she did at the start of this episode, so it was nice to see them have a deeper conversation. 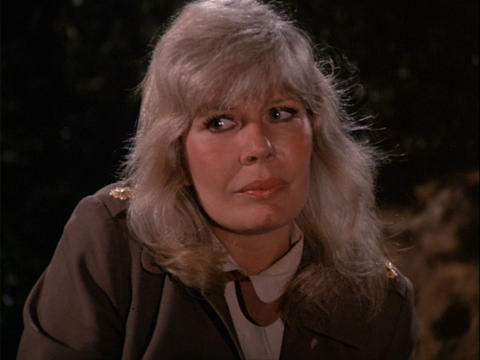 The B story involving Hawkeye and B.J. having to deliver a calf wasn’t all that interesting, other than seeing B.J. relay the veterinarian’s instructions to Hawkeye via the camp P.A. system. That was funny. Klinger’s lottery likewise didn’t add much to the episode but it helped give the episode a nice ending. I did like Charles preparing for and delivering the lecture in classic Charles fashion.

This was at least the second episode to involve a pregnant calf. Trapper delivered a calf in Season One’s “Dear Dad.” Were there any others?

Why does B.J. put an empty hot water bottle on Charles’s shoulder just before leaving the Swamp with Hawkeye and Colonel Potter? It’s a really random thing to do. Perhaps there was a scene cut from the episode?

I wonder if Charles ever got his record. Even though Margaret didn’t make it to Tokyo, Charles still covered for her.

Finally, why did Klinger have a bran muffin with him in the jeep? Or cheap scotch, for that matter.