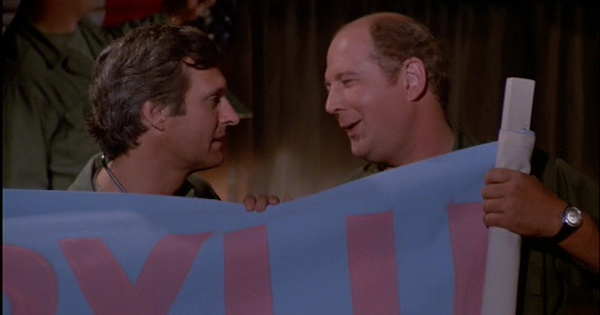 Capsule Summary: Hawkeye and Charles start a rumor that Marilyn Monroe will be visiting the 4077th; B.J. has the day off and plans to spend it fishing.

The A story in this episode, in which a rumor spreads throughout camp like a wildfire, is broadly reminiscent of “Rumor at the Top” from Season 10. The big difference is that the rumor in that episode came from outside the 4077th while “Bombshells” saw the rumor intentionally started by Hawkeye and Charles. It probably was fairly common for rumors to spread around MASH units and other military posts during the Korean War.

The story about Ted Williams leaving Korea that kicked off Margaret’s rumor and led to the Marilyn Monroe rumor was true. The baseball great served in World War II and during the Korean War, leaving Korea in June 1953. As for Monroe, although she didn’t make it to the 4077th in this episode, she did actually go to South Korea to entertain troopers but not until February 1954, more than six months after the armistice had been signed. You can see pictures from her visit at the National Portrait Gallery of the Smithsonian Institution.

It’s only fitting that Hawkeye started the Marilyn Monroe rumor with Klinger, the person most likely to believe it and, more importantly, the person who could spread the rumor far and wide and fast. The rumor spread so fast, in fact, that somehow Colonel Potter knew when Monroe would be visiting the 4077th before anyone told him.

The B story in this episode is pretty grim. It’s yet another example of an episode mixing a serious storyline with a silly one. With this episode I’m not sure it works all that well simply because B.J.’s storyline is so dark and upsetting that the contrast between it and the absurd Marilyn Monroe storyline is almost too much to handle. As a viewer, I felt like I had whiplash going from one extreme to the other.

B.J. calling himself a soldier for cutting the rope is a great bit of dialogue:

We sit around here in our Hawaiian shirts and red suspenders thumbing our noses at the Army, drinking home-brewed gin and flouting authority at every turn, and feeling oh-so-superior to those military fools who kill each other, and oh-so-self-righteous when we clean up after them. Well, good luck to you, pal. I hope you can keep it up. The minute I cut that rope, that made me a soldier.

I had not watched this episode in a while so I couldn’t remember if B.J. found the soldier he left behind or not. I kept hoping he would but he didn’t. I’m not sure the tag scene in which B.J. gives his Bronze Star to Corporal Sonneborn works. It almost feels like a cop-out, like B.J. was able to feel better about himself just by giving away his medal.

did you notice that when B.J. is at the 8063rd and stops the ambulance, the driver is played by regular background Dennis Troy? He actually gets a line of dialogue in the episode (“Hey, what gives?”) despite being uncredited.