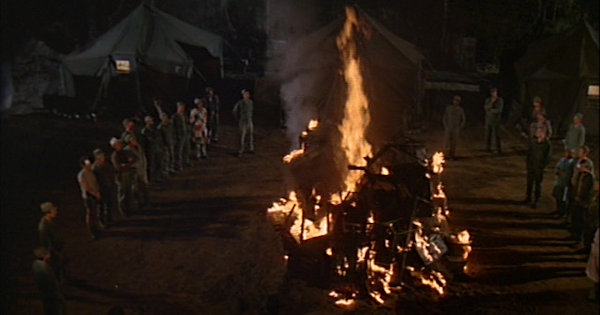 Capsule Summary: Sidney Freedman arrives at the 4077th with a patient who hates him for sending him back to the front. Colonel Potter asks Sidney to help relieve tension among the camp’s personnel.

My first reaction while watching this episode was to wonder if the Army really would have sent a psychiatrist to the front lines. I’m sure psychiatrists were considered very valuable assets to the Army, able to heal the mental wounds of its soldiers and get them back to the fight. I suppose Sidney could have gone to the front on his own, without clearing it with any of his superiors, willing to risk his life for one of his patients.

This was a fairly simple episode, with just one storyline that focused on how the pressure of war was affecting people, Sidney included. Colonel Potter worries the 4077th is under too much pressure; Margaret thinks Charles is in love with her; Charles thinks Margaret is in love with him; Klinger fears he actually is going crazy; and Radar is upset because he needs his teddy bear.

It’s too bad we don’t see Hawkeye or B.J. visit Sidney, particularly after seeing them playing Smell That Food in the mess tent. Father Mulcahy drops by by the VIP tent but doesn’t talk about himself; instead, he turns the tables on Sidney and counsels him.

The minor subplot involving Sidney’s somewhat recovered hysterical paralysis patient Tom is connected to the main storyline, so I’m not sure it really counts as a separate storyline. I’d be curious to know why actor Michael O’Keefe was brought back to play Tom after appearing in the Season Three episode as a soldier with a far more severe case of hysterical paralysis. Did someone remember his earlier role and specifically go after him?

Likewise, I wonder why Peter Riegert was credited as Igor in this episode (he was also credited as Igor in “Change Day”). This was Season Six. Igor had been around a long time. Maybe Jeff Maxwell wasn’t available. If so, why wasn’t the character’s named changed?

Filming the bonfire scene must have been a lot of work — but hopefully also fun — for the cast and crew. I would think they only had one chance to get it right. Poor Charles, losing his cot to the fire. And how about that desk Colonel Potter helped toss into the flames? Are we supposed to assume it was his desk?

If you watch carefully during the scene in the Mess Tent when everyone starts yelling, you can see Kellye in the background covering her ears.