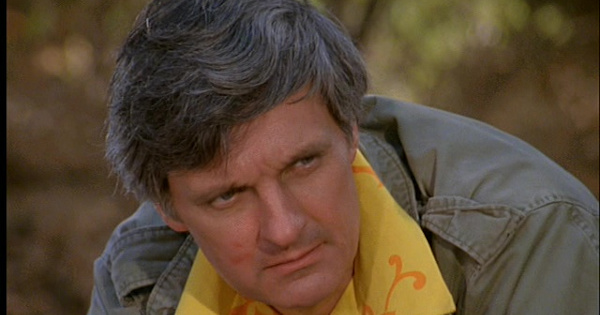 Capsule Summary: Hawkeye finds himself held at gunpoint, desperately trying to save the life of a gravely wounded North Korean soldier. Meanwhile, back at the 4077th, Colonel Potter challenges Charles to a bridge tournament.

Many, many years ago when I first started this website, I started writing lengthy summaries for various episodes of M*A*S*H. I didn’t complete very many but I did finish one for “The Best of Enemies,” the Season Nine premiere. For some reason it has stuck in my head ever since and I can clearly remember watching the episode on FX, furiously writing notes on a pad of paper trying to keep up with the action.

I thought then and I still think now that Hawkeye’s bright yellow Hawaiian shirt was just too much. Too bright, too yellow and too many layers. Why was he wearing his Army t-shirt, the Hawaiian shirt and the shirt from his Army uniform? It’s a silly thing to fixate on, I know, and we don’t know when this episode is supposed to take place so I suppose it could have been chilly. On the other hand, B.J. was sleeping in just a t-shirt so it couldn’t have been that cold.

Obsessing about clothing aside, this is not an episode I’m very fond of. Neither of the storylines are that strong. Of the two, I prefer Hawkeye’s, which suffers primarily from feeling repetitive and unrealistic. Hawkeye must have graduated from the TV sitcom school of talking-to-someone-who-doesn’t-speak-English, which just means speaking louder and using vague hand gestures. As in other episodes, he somehow thinks that will someone bridge the language barrier.

His reaction to being “captured” by a North Korean isn’t believable, even for someone like Hawkeye. If ever there was a time to act seriously, I think that would be it. Seeing him stop and turn back to help dig the grave for the dead soldier was a nice moment, although again I’m sure it would have been more realistic to see him run away at the first opportunity.

What happened to Colonel Potter in this episode? Every word out of his mouth felt over-the-top and in many case over-enunciated. I don’t know if it was the writing or Harry Morgan getting back into the groove of the 4077th but something was really off. This was the fourth episode produced for Season Nine, so the latter theory doesn’t really hold water. To some degree, Charles too felt a bit like a caricature. His upper crust qualities were certainly in full force. Margaret, B.J. and Father Mulcahy fared better, as did Klinger with the exception of his question about horses being mammals. Klinger wasn’t that dumb.

I can’t decide if Charles was actually trying to cheat or not. Frank definitely would have tried cheating. Desperate times call for desperate measures and Charles was looking shiftily at Colonel Potter’s cards. But was he really trying to signal Margaret or just nervous?

I’ve never played bridge and actually don’t know how it’s played. Does understanding the game add anything to the viewing experience of this episode?

This episode marked the fourth and last appearance by Mako on M*A*S*H. His first was in “Rainbow Bridge” in Season Three.

As with other episodes containing Korean dialogue, I wonder exactly what Li Han was supposed to be saying. Was it actually Korean?

Can anyone tell if the stamp on the letters Hawkeye and Colonel Potter received are 1950s vintage or from 1980?

13 Replies to “Episode Spotlight: The Best of Enemies”