Capsule Summary: After spending the night in a bombed-out building, Hawkeye and Margaret have a lot to talk about. Back at the 4077th, B.J. decides to head to the skies to look for his missing friend.

There were three two-part episodes of M*A*S*H, which originally aired on CBS as two half-hour episodes on two consecutive weeks rather than one hour-long special later split in two for syndication. “Comrades in Arms” was the first of these episodes. I reviewed Part I back in December 2013. I didn’t rewatch the first half in preparation for viewing this but the recap at the start got me up to speed pretty well.

This episode picks up the morning after Part I, after Hawkeye and Margaret sought comfort in each other’s arms. The two wake up and have drastically different reactions to what transpired between them. Hawkeye is incredibly uncomfortable with the situation, bordering on terrified. Margaret, on the other hand, acts like a love-sick schoolgirl, fawning over Hawkeye and calling him darling.

The big question is whether it was out of character for Margaret. I’m of the opinion it was at minimum a bit over the top. Margaret also reacts hysterically after seeing a North Korean soldier but that at least can be forgiven as true fear mixed with whatever other emotions she was feeling.

What can’t be explained away as nerves is Hawkeye’s decision to try to hide the two of them under a woven mat. It was a little too slapstick if you ask me.

I’m not sure how realistic it was for Charles to be using the past tense to refer to Hawkeye and Margaret. There was no reason to think the two were dead so it really rang false for me.

I did enjoy the look on Father Mulcahy’s face when Colonel Potter, B.J. and Charles were wondering if anything happened between Hawkeye and Margaret. 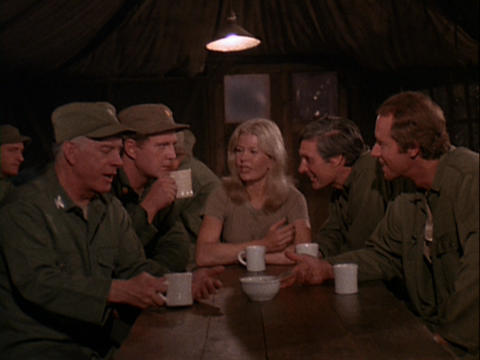 What happened to Hawkeye’s leg wound after they got back to the 4077th? He wasn’t limping at all.

The vascular clamp used by Hawkeye the 8063rd was designed in “Patent 4077,” which aired several weeks after this episode but was actually produced before it.

Look closely when the chopper lands at the 4077th. It doesn’t look like Mike Farrell is in it. It must have been a stunt double.

I couldn’t help but notice the fried chicken given to Hawkeye and Margaret (and passed around in the background) in the mess tent. It looked delicious.