Capsule Summary: Father Mulcahy is furious after being passed over for promotion again. Meanwhile, Hawkeye, Margaret, B.J., and Winchester have to run Rosie’s Bar temporarily.

There weren’t a lot of “sequel” episodes on M*A*S*H that followed up on storylines from earlier episodes. This was one of those episodes. Only a few weeks ago I reviewed Season Seven’s “Eye For a Tooth” in which Father Mulcahy is frustrated at being passed over for a promotion to captain. And now thanks to the random number generator I use to pick which episodes get the spotlight treatment here I am reviewing the episode that finally saw Mulcahy get his promotion: Season Eight’s “Captains Outrageous.”

In this episode, Father Mulcahy states that he has been passed over for a promotion four times. That seems like a lot to me but I’m not familiar at all with how promotions worked in the military during the Korean War. Maybe four was par for the course. Father Mulcahy does mention that he knows a lot of nerds from school who have become majors, which is a step above captain, so perhaps his lack of promotion was unusual.

Interestingly, Father Mulcahy didn’t really have much to do in this episode other than make some bandages and express outrage at his personnel file being misplaced. He was involved somewhat in the minor Turk/Greek storyline. Most of the episode seemed to be spent on the larger Rosie’s Bar storyline.

I wish we had seen a little more of Hawkeye, B.J., Charles and Margaret tending bar at Rosie’s. Seeing Charles as a bartender was a hoot. The Turk/Greek storyline was pointless and I’m sure that time could have been better spent showing B.J. as a bartender, for example. Or Margaret.

I think my favorite piece of dialogue from the episode is this exchange between Klinger and Colonel Potter: 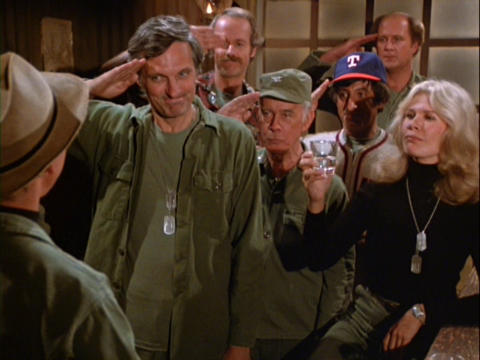 This episode saw the return of actor John Orchard to M*A*S*H in the role of Muldoon, the corrupt MP who turns a blind eye to Rosie’s Bar as long as he gets some whiskey in a coffee cup. Orchard portrayed Australian anesthesiologist Ugly Johny in a number of episodes during Season 1 before being written out. I’ve always wondered why he was brought back for this one-off role.

Also in this episode was a rare example of Hawkeye saluting and an even rarer example of him being serious while doing so.

Why was Margaret wearing a blue bathrobe while helping wrap up Rosie’s ribs?

Is it just me or does William Christopher look a bit like George Morgan without his glasses on?

Hawkeye calls himself Noel the Coward, a reference to English playwright Noël Coward.