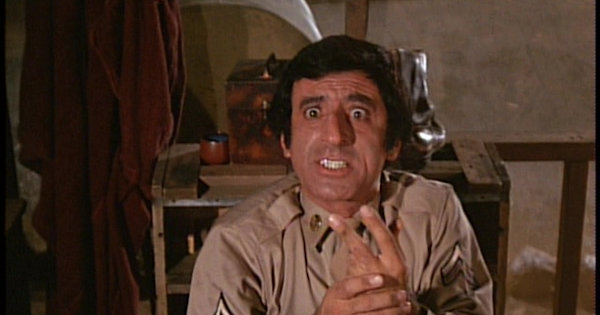 Capsule Summary: Colonel Potter institutes a Soldier of the Month program for the enlisted men. Meanwhile, Frank develops a high fever and writes a will.

There was a lot going on in this episode. The A storyline was, of course, the Soldier of the Month contest, involving both those in charge of and those participating in it. The scene in which Frank was nominated to head up the contest was yet another example of Frank’s inability (or lack of desire) to assert himself, allowing Margaret to speak for him.

The B storyline could either be the mysterious hemorrhagic fever or Margaret’s fiendish plot to get Frank to dictate a will while delirious from fever. The fever storyline didn’t get much screentime but was the only serious aspect of the episode. It gave Father Mulcahy something to do other than just sort of take down Frank’s will.

This was a great episode for Frank, despite the fact that he spent much of it delirious due to high fever. There as his line about Frank Burns always doing more than his share; his disturbing rat trap; his fainting spell in the Swamp; his feverish revelation that he had money buried in his backyard (with the map in the freezer) and had been taking prescription kickbacks.

Klinger also had some great moments in this episode, including his attempt to curry favor with Frank by helping track down and trap rats but mostly his absurd plan to cheat on the Soldier of the Month exam by writing all of the answers on his body.

Upon returning from Tokyo, where he was celebrating his Soldier of the Month win, Radar calls Colonel Potter “Sherm” while intoxicated, one of the very rare instances he’s called Sherm or Sherman rather than Colonel Potter.

Speaking of Radar, this episode contains another example of his incredible appetite and ability to eat anything that the mess tent cooks up.

There was a reference to The Shadow in this episode as well as an anachronistic reference to the murder of Albert Anastasia (which took place in 1957).

Klinger calls himself Nutsy Fagin while explaining to Frank how he is not insane if he wins the Soldier of the Month contest but is insane if he doesn’t. According to Larry Gelbart in a 2003 post to the alt.tv.mash newsgroup, this is “a reference to someone who had a screw loose, who wasn’t ‘all there’.”

10 Replies to “Episode Spotlight: Soldier of the Month”