Capsule Summary: Margaret engages in an escalating prank war with Hawkeye and B.J., egged on by Charles. Meanwhile, a frustrated Father Mulcahy is determined to get a promotion.

I liked two-thirds of this episode: all of Father Mulcahy’s storyline and half of the prank war gone too far storyline. What I didn’t like was the way Charles was portrayed as the instigator quietly pushing Margaret and Hawkeye/B.J. to escalate their pranks. Although it might seem beneath him, the fact that he would enjoy pranks wasn’t the issue.

He just came off as a little too shady and conniving. A little too slimy. The scene near the end of the episode after the tables had been turned, when he was screaming at Hawkeye, B.J. and Margaret, was actually a little disturbing. It made him appear unstable and wasn’t at all funny.

The rest of the prank war storyline was decent. Father Mulcahy getting a pie to the face was a bit much. For William Christopher’s sake I hope that scene didn’t require too many takes. Was I the only one who thought of anthrax after B.J. opened his letter and white powder went everywhere? The nurses lying in wait for Hawkeye and B.J. in the Swamp after Margaret stole their clothing from the showers was hilarious, particularly the one nurse with a magnifying glass.

I wonder if scriptwriter Ronny Graham wrote the scene as a counterpoint to the infamous Hot Lips shower scene in MASH the movie. 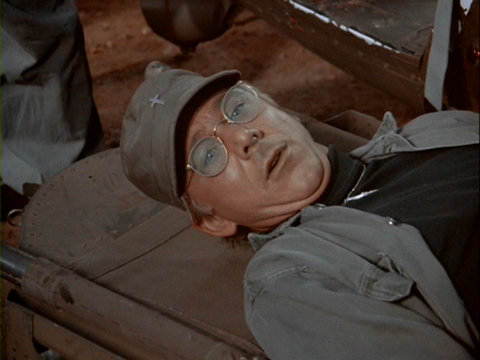 In so many episodes Father Mulcahy doesn’t really have all that much to do, so it’s nice to see him become the focal point of an episode like this one. I couldn’t help but spend much of the episode trying to remember if we had seen a chopper unloading a single patient before without a counterweight. It wasn’t until “Captains Outrageous” in Season Eight that Father Mulcahy would finally be promoted to captain.

A P.A. announcement at the beginning of the episode mentions a party to celebrate the one-year anniversary of the Officer’s Club, meaning this episode takes place a year after “Officers Only” from Season Two.

Why was Charles so sweaty during the scene in which he was revealed to be pulling the strings in the prank war? Was he really that upset?

21 Replies to “Episode Spotlight: Eye for a Tooth”