Capsule Summary: The 4077th enjoys the culinary wonders of a talented cook while Colonel Potter worries about his relationship with Mildred.

I really like the A storyline in this episode, the one involving the incredible culinary delights cooked up by Private Conway. It’s a fun storyline if a somewhat unbelievable one. Could even the best chef make a Spam Parmesan that would delight a Winchester? Would Colonel Potter, even distracted by his problems with Mildred, allow Klinger to turn the mess tent into a bistro complete with reservations?

The B storyline felt repetitive. Colonel Potter is upset about something and yells a lot. Hawkeye & Co. try to figure out what is wrong with him. I honestly feel there was enough to the A storyline that the episode didn’t need a completely separate B storyline. There could have been a variety of subplots involving various characters and their reactions to Conway’s cooking. Charles could have gone to great lengths to try to keep him at the 4077th.

Speaking of Charles, I love this exchange:

Charles: “Of course he’s not telling you. You all pussyfoot around him as if he were a vestal virgin. Yo must appeal to his sense of logic and common sense. You march into his tent. You demand to know why he’s behaving like an ass.”
B.J.: “Well, you’re our resident authority on behaving like an ass, Charles. You want to talk to him?
Charles: “All right, I will.”
Margaret: “Are you crazy?”
Hawkeye: “Let him go, Margaret. Sincerity didn’t work. Maybe pomposity will.”

And then Margaret goes and does exactly what she insisted others don’t do. Also repetitive. 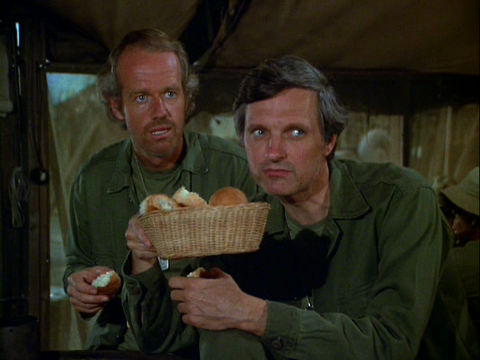 Gary Burghoff receives an “Also Starring” credit during the opening credits yet makes little more than a glorified cameo appearance that added little to the episode.

What was going on with Charles and Nurse Kellye? Did he just need a date for dinner? And what exactly was on the wine list Klinger gave Charles?

Hawkeye’s comment to Margaret about “when the shower curtain fell” has to be a reference to the shower scene from the movie MASH.

Notice the freeze frame at the end of this episode. Not only is it really dark but it doesn’t match the scene just before it, as if it was cut abruptly.

11 Replies to “Episode Spotlight: Too Many Cooks”