Capsule Summary: After returning from a mysterious trip to Tokyo, Colonel Potter begins acting strangely. Hawkeye, temporarily left in charge of the 4077th, must deal with a group of orphans in need of inoculations.

This episode featured one of if not the best dramatic performances by Harry Morgan on M*A*S*H, a counterpoint to his comedic tour de force in “The General Flipped at Dawn.” Colonel Potter’s toast to his deceased comrades from World War I is beautiful.

This wasn’t the first episode to feature Colonel Potter acting surly and withdrawn and everyone else wondering just what was going on. At least in this episode he didn’t yell as much as in others. At times, angry Colonel Potter became something of a caricature, too unbelievable to be taken seriously. In this episode, he was angry at the world, the passage of time and the toll it had taken.

Sometimes, when characters we’ve never heard of before are used as plot devices, it doesn’t ring true. Why should we care about people who have never been mentioned before and won’t be mentioned again? Here, though, it was Colonel Potter’s reaction to the death of his sole surviving World War I buddy — and by extension all of his buddies from the Great War — that mattered. 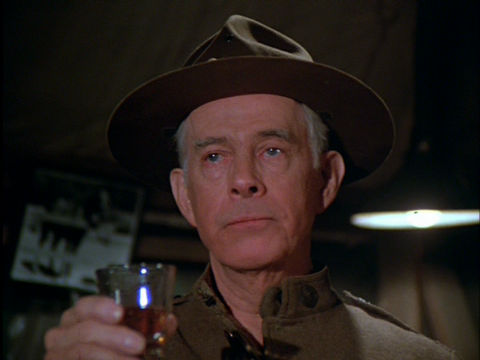 The secondary storyline in this episode didn’t do much for me. It was nice that the two intersected, allowing Colonel Potter to rail against the killing of horses for meat. It’s a somewhat strange scene but it works.

If you watch look closely, you can tell that Charles was crying during Potter’s explanation of the tontine.

This is one of the episodes featured in the 1981 documentary “Making M*A*S*H.”