Capsule Summary: Hawkeye falls in love with a South Korean woman struggling to take care of her mother and a group of refugees. Meanwhile, after a new nurse arrives at the 4077th, Margaret worries her husband is cheating on her.

It’s hard not to care about Kyung Soon. She’s an interesting character, strong and independent while also sympathetic. Yet the relationship that develops between her and Hawkeye is problematic. We’re supposed to believe they’ve fallen madly in love over the course of two weeks. But we don’t see that. We see their first date and (potentially) the morning after, or maybe some later date.

We know as the episode unfolds that Kyung Soon will never been seen or mentioned again. That makes it difficult to connect to her. One of the drawbacks of episodic television is that very little carries over from one episode to the next. Hawkeye’s pain falls a little flat because we know he’ll probably be chasing some random nurse in the next episode rather than pining over a lost love. And not even his first lost love. 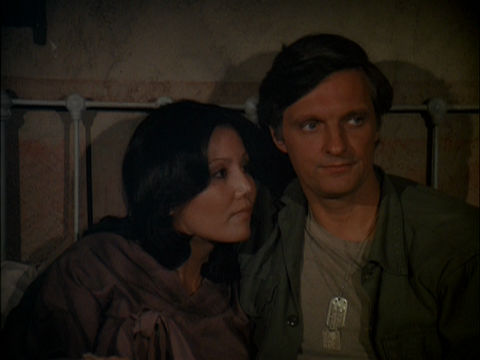 Of course, one can’t blame M*A*S*H for being an episodic television series. But I also can’t help but wonder sometimes what could have been. What if Kyung Soon had been a recurring character for several episodes, allowing her relationship with Hawkeye to develop and grow? Imagine how much more of an impact her departure would have made.

Personally, I think Hawkeye asking Kyung Soon how she can leave comes off more selfish and pathetic than intended.

This episode also features one of the few running storylines in M*A*S*H, the continuing saga of Margaret’s love life. It was a minor part of the episode but an important one for the evolution of the character. Margaret suggesting that Colonel Potter should have just painted his wife’s car rather than sell his wife’s car was amusing.

This was the fifth episode to be both written and directed by Alan Alda.

27 Replies to “Episode Spotlight: In Love and War”