Capsule Summary: A Korean family insists the 4077th is on their farmland and refuses to leave the compound. Meanwhile, another Korean woman says Radar is the father of her baby.

The highlight of this episode was definitely Pat Morita making his second guest appearance as Captain Sam Pak (the first came in “Deal Me Out“). Story-wise, there are two things about this episode that stand out.

First, there’s the fact that for once Frank was actually useful and got his way, trucking the South Korean civilians off to a refugee camp. True, he couldn’t convince Henry to fire off some warning shots to scare them off as he had originally hoped, but he was still able to get through to Civilian Affairs when Henry couldn’t. His phone call to civilian affairs ended on a bizarre note; we’re supposed to assume he was propositioned by the male major on the other end of the call.

Second, it doesn’t ring true to me that Henry, Hawkeye, Trapper and everyone else would assume that Radar was the father of the baby, even after he claimed he wasn’t. Why would they believe a complete stranger over a fellow soldier, a colleague and/or a friend? It also doesn’t seem in character for Radar to eventually insist the was the father just because he wanted the 4077th to keep thinking he had done It. It would have made more sense had he tried to do the right thing because he wanted the baby to have a father. 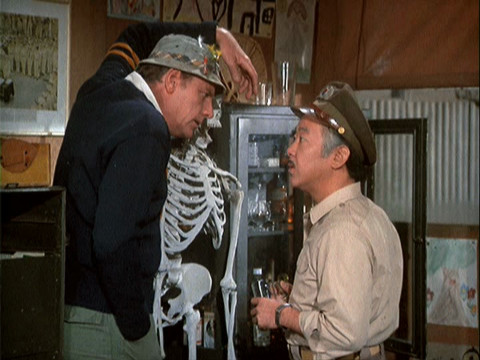 It’s too bad Captain Pak only made two appearances on M*A*S*H. He does a great job as a straight man opposite Henry. I particularly like his line “Well, Sheriff, looks like you’ve got troubles right here in Pregnant City.” And notice when Henry throws Captain Pak the keys to the liquor cabinet, he uses an impressive over-the-shoulder toss. I wonder if it took more than one attempt to get that right.

I thought perhaps the opening shot of Radar playing Reveille and getting hit in the face with an egg was filmed for another episode. He’s wearing gloves and a jacket but in all the other outdoor scenes in the episode, he and the other characters are only wearing their uniform shirts. But Larry Gelbart was asked about the scene at the alt.mash.tv Newsgroup in 2004 and had this to say:

The chief purpose of that piece of business was to do something humorous.

Detesting the bugler is an age-old Army tradition (In Irving Berlin’s song,
“Oh, How l Hate to Get Up in the Morning,” one lyric says, “Some day l’m going
to murder the bugler).

Perhaps there is something Freudian about Radar getting hit with a raw egg and
then being accused of impregnating a girl. But that is a more then 30 year-old
afterthought.

For some reason, this episode went to great lengths to show people walking past the windows in Henry’s office.

The South Korean farmer didn’t appear to know English. But the shoeshine boy did. Where did he learn to speak it? Choon Hi said she learned from nuns but wasn’t part of the family squatting in th 4077th compound.

If you listen closely, you can hear Father Mulcahy say “Alright Dennis, fall out” as the truck carrying the Korean civilians drives off. The truck driver was played by Dennis Troy in an uncredited role. Was Mulcahy’s line scripted?

Margaret does not appear in this episode. I don’t think I saw Klinger, either.