Capsule Summary: Fed up with B.J. and Charles, Hawkeye moves out of the Swamp. Meanwhile, Colonel Potter tries to paint a portrait of his friends at the 4077th.

If there’s a highlight of this episode, it has to be Charles accidentally calling Colonel Potter “Colonel Potty” and complaining about “becoming better acquainted with all the Hunnicutts: Beej, Peg and the little wet one.” Or perhaps Charles ripping out the end of Hawkeye’s book in an attempt to get some sleep.

Otherwise, this is an episode that just doesn’t work, due in large part to the ridiculous immaturity on the part of Hawkeye and to some extent B.J. and Charles as well. Even for a character prone to overreaction, this was over the top.

In “The Smell of Music” it made sense that Hawkeye and B.J. were fed up with Charles and his horn. Their plan to stink up the place until he quit playing wasn’t so believable. But in “Picture This” the tipping point for Hawkeye was B.J. taking his socks without asking, symptomatic of his larger issue with lack of privacy.

In true Hawkeye fashion, he decides to move out and live on his own in a hut behind Rosie’s. It’s a decision be immediately regrets, the hut being lonely and probably unsanitary, but once there he can’t very well move back to the Swamp. That would be admitting he overreacted.

Margaret, Klinger and Father Mulcahy scheming independently to trick the Swampmates into moving back in together wasn’t all that believable, either. The fact that it worked, at least at first, was even more implausible. 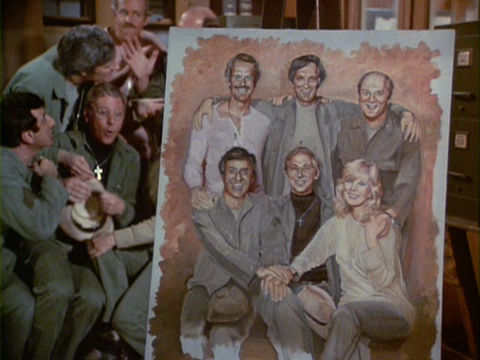 Could the conversation between Hawkeye and Igor about renting the hut be the most dialogue Jeff Maxwell had in a single episode?

The theme music played during the opening credits sounds almost identical to the closing credits, which is odd. One of these days I’ll get around to examining the theme music using throughout the series.

Truth be told, if I had to listen to B.J. share every detail from the letters Peg wrote him, I’d probably want to move out, too. Mike Farrell did a wonderful job portraying B.J. as an obnoxiously mushy father who thinks everything his daughter does is worthy of attention.

18 Replies to “Episode Spotlight: Picture This”